Winning three-year-old bought by Dan Astbury and Oliver Greenall for £310,000

Queen’s Vase hopeful Zinc White will race for new connections at Royal Ascot on Wednesday having been bought by Dan Astbury and Oliver Greenall for £310,000 at the Goffs London Sale on Monday.

Returning for the first time since 2019, the auction was held virtually instead of at its traditional home of Kensington Palace Gardens and this year offered a boutique catalogue of 12 lots.

Zinc White had previously been trained by Ralph Beckett to win twice this year with his most recent success coming in a 1m6f handicap at Sandown last month, where he was an impressive seven and a half length winner.

A three-year-old son of Vadamos, Zinc White is out of the Group 1-winning Dalakhani mare Chinese White and is a half-brother to the three-time winner Misty Grey and is from the family of Group 1 winner and leading sire Invincible Spirit.

The unbeaten Tipperary Sunset, a son of Overbury Stud’s first-season sire Ardad, was another to make six figures when purchased by the Mandore International for £200,000 and the two-year-old is engaged in the Listed Windsor Castle Stakes on Wednesday.

One other lot was snapped up during the trade with the winning Military Mission, a son of Mastercraftsman, bought by McKeever Bloodstock, Gai Waterhouse and Adrian Bott for £170,000. The four-year-old currently holds entries in the King George V Stakes and Golden Gates Stakes.

“Like every auction house we have embraced online sales, but we hope that this year’s virtual Goffs London Sale which was conducted in the form of a live broadcast from Kildare Paddocks and London broke new ground with its unique approach.

“We’ve always said that we judge this sale by different metrics and so whilst selling 3 of the 11 lots offered would normally be a disappointment, the London Sale offers an opportunity for owners to cash in before Ascot or run at the Royal Meeting and we wish existing and new connections every success over the next five days. That said, we sold horses to Australia, France and Britain to demonstrate the global appeal of our London Sale. 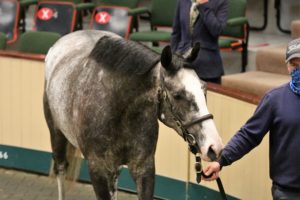