Twenty-five years on from Shaamit’s success in the Derby, trainer William Haggas is hopeful that Frankel colt Mohaafeth can continue his upward trajectory when he lines up in next week’s Blue Riband.

The three-year-old, who sports the colours of the late Sheikh Hamdan Al Maktoum, is unbeaten this season and was last seen winning the Listed Newmarket Stakes at the start of this month by five lengths.

On Wednesday, Mohaafeth underwent a racecourse gallop under jockey Jim Crowley on Newmarket’s Rowley Mile with stablemates Ilaraab and Faylaq.

Speaking at a virtual press conference hosted by the Jockey Club ahead of the Cazoo Derby Festival, Haggas said: “He worked with two very smart older horses and went very nicely.

“The ground was too soft really, and I’ve been quoted several times as saying he’s a top-of-the ground horse – and I stick by that. It was surprisingly soft on the Rowley Mile, but he travelled very comfortably with Ilaraab and Faylaq.

“It was a hard piece of work, and now we hopefully can have an easy time as we lead into next Saturday.

“I wasn’t trying to find out if he was going to win the Derby. But I wanted it like a racecourse gallop should be, so he walked around the paddock to make it different from a normal gallop.

“I gave him a hard task today. Faylaq is rated 105 – which is probably too high – Cieren Fallon rode him, and Tom Marquand rode Ilaraab. So, if you take weight-for-age in, he was probably asked a lot, but I wanted the other two to get going three furlongs out, so he had a stretch. It just means he can have an easy week next week.”

Haggas is hoping that the weather improves for the Derby and added: “It was bordering on heavy for Breakfast with the Stars [Epsom’s gallops morning] so I’m told, but it dries pretty quickly there and if we can get some warmer and drier weather, Andrew Cooper might even have to touch his watering can, and it’ll be what it will be.

“If it’s soft I would be very keen not to run and wait to run at Ascot but if it’s good or faster then we’re up for it big time.

That was a hugely taking performance from #MOHAAFETH, who didn’t come off the bridle under @JimCrowley1978 to take the Listed @NewmarketRace Stakes ✈️

“I think he’s got a chance, but I’ve always felt that it’s not whether they’ll see it out but whether they’ll improve. Whether he’s better at a mile and a half than a mile and a quarter I’m not so sure, but there’s no better race in the world than the one next Saturday so we’ll be very keen to give it a go.

“When we bought him as a yearling, he was our ‘Derby horse’ in big, inverted commas. When he went to Lingfield in March I didn’t think he was our Derby horse, but I thought he could be an Ascot horse and it was really that effort in the Newmarket Stakes that appealed to everyone and brought him into focus.

“It could be that he was really flattered by that, but it also could be that the horse is making good improvement quite quickly, so I have taken the latter line and there’s no bigger race than the Cazoo Derby.”

For Haggas, the Derby is still one of the most iconic races as a trainer to capture and he said: “The race means exactly the same as it did 25 years ago in that it’s the ultimate race for an English trainer to win or to try to win. We’ve thrown a few darts at it unsuccessfully and it’s a very hard race to win.

“If we’d have known how difficult it was to find a horse to run in it never win it all those years ago, we’d have enjoyed Shaamit even more!

“What he did was pretty phenomenal in that in the history of the race only two horses have ever won the race on their first start at three, so he must have been a fantastic on that day. We had 40 horses then and we were chugging along fairly ordinarily.

“Horses like that don’t come along very often, but that was a long time ago and since then Galileo has come along and I think it’s fair to say he’s dominated the race. When Galileo is no longer producing horses, it might open the race up to Sea The Stars!

“We had the usual thing that it was ‘the worst Derby people had ever seen at Epsom’ but it didn’t matter because we won it and I’d be delighted for the same to happen next Sunday if the headlines are ‘Mohaafeth wins worst Derby on record’ – it suits me well!”

Haggas will also have the exciting Al Aasy to look forward to and the recent Group 3 winner is set to contest the Coral Coronation Cup a week on Friday.

He added: “You’re never quite sure if they’re going to act round there [Epsom] but he’s a very well-balanced horse and he’s a good mover so I don’t see why not. I’m glad there aren’t going to be 50,000 people there in terms of the occasion, but I think we’ll be alright – he’s a boy and he knows he is but once he gets out, he’ll be fine and he’s not an issue.

“We’ve always thought plenty of him. He’s a lovely horse and he works the way he runs in that he gives everything on the gallops as well. The John Porter, which he started in this season, has worked out pretty badly but he won easily and the same last time out in the Aston Park. The style of his win was very good and he’ll have a good chance if all goes well.” 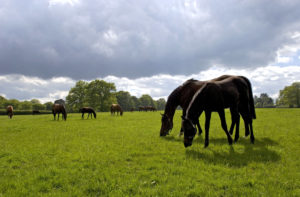