Fresh from saddling his first winner on Monday evening when two-year-old Vintage Rascal scored at Windsor, young trainer Tom Ward was among those casting their eye over the premier lots on offer at Tattersalls’ Book 1 Sale on Tuesday.

Ward, who set up on his own in August after four years as Richard Hannon’s assistant, is based at Charlie Mann’s yard in Lambourn and has around 25 horses currently, having been active at the yearling sales in Britain and Ireland in recent weeks.

“It’s been a lot of work, but it has been great setting it all up. My fiancée, Alex Lowe, and I have put a lot of time and effort into it,” said Ward. “I was delighted to get a [first] winner yesterday with Vintage Rascal as it’s a massive thing to get off your back.

“He’s a nice horse who we’ve always loved and while we never thought he’d be a two-year-old, we thought it would be good to give him one run this season and then put him away.

“It’s all about next year as he’s big, raw and leggy. I think we’ll have a lot of fun with him next year, so we’ll put him in bubble wrap to make sure he is spot on for 2020.

“So far, it’s all been a bit surreal, but I’ve had a lot of good support from a lot of different people. There’s ten in the yard currently but I have 25 overall, with that number including the yearlings which I’ve bought and will come in early next month after being broken in.”

VINTAGE RASCAL and @tommarquand win to give @TomWardRacing his first winner as a trainer! Huge congratulations to Tom and all those involved 🎉🏇 pic.twitter.com/ywJhHGzvAw

Charlie and Julia Rosier, who own the Nathaniel colt Vintage Rascal, have been among Ward’s early supporters since he took out his licence. They currently have five horses with him and are on the lookout for a sixth to join his string.

He said: “Vintage Rascal’s owner is coming up here tomorrow and I’ve got a list of lots for him to look at. He’s keen to buy but, obviously, the prices are quite inflated. Hopefully we’ll try and get one.

“It’s amazing to be at Book 1. It’s a tough sale as you’ve got to bide your time and just hope something will come your way. You’re looking for a nice type but also a physical who can walk and use themselves correctly.

“That means most people are in the same boat, but there is the odd time when one floats your boat more than others.”

As for next year, there is plenty to look forward to for Ward. “We’re in Charlie Mann’s yard at the moment which is great, but we’re going to move next door where we are building a yard and a house.

“That will probably take a year but once it’s done, it will be very exciting to move in there.

“The main focus for next year is to have as many winners as we can, as well as getting some nice horses and new owners into the yard.” 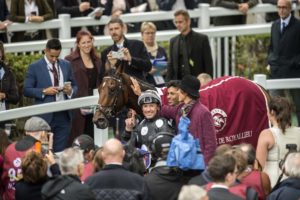