Vow And Declare prevailed by a head in a thrilling finish to the Group 1 Melbourne Cup at Flemington on Tuesday to become the first Australian-bred horse to land the contest since Shocking in 2009.

The Declaration Of War gelding broke from stall 21 under jockey Craig Williams, who sent his mount forward to take the lead on the rail before Twilight Payment took over with Master Of Reality and Frankie Dettori sitting second.

As the field turned into the home straight, Dettori kicked on Master Of Reality but could not put a seal on matters, while Williams galvanised Vow And Declare on the inside, getting up in the final strides to score by a head with Prince Of Arran running another stormer, just a nose away in third.

In a slowly run race, those at the back of the 24-strong field never really stood a chance to show their best form as the runners at the head of affairs dominated proceedings.

There was drama after the race with Master Of Reality subsequently demoted to fourth after the stewards deemed Dettori’s mount had caused interference to the Aidan O’Brien-trained Il Paradiso, who was promoted to third. Prince Of Arran also moved up a place, securing his second placed finish in the famous event.

The stewards suspended Dettori for nine meetings, who said afterwards “I feel like crying” after his winless streak in ‘the race that stops a nation’ was extended to 17 rides.

“I want to savour this moment – it means so much”

It was a first Melbourne Cup for Danny O’Brien, who trains at Flemington, and he said: “I felt he was going to finish third or fourth, which would ultimately have been a bit disappointing as we were so close to winning, but he just keeps surging for you, and that’s exactly what he did.

“He’s a very young horse and he’ll get better with age. I expect we’ll try to get back to this race next year.”

Craig Williams, also winning the Cup for the first time, said: “I want to savour this moment – it means so much. Not only is this our greatest race but, as you can see by the form book, it is targeted by horses from all around the world – and we did it with an Australian horse.

“We had a difficult draw but he’s a great horse.”

Vow And Declare, by former Australian shuttler Declaration Of War (War Front), winner of the Queen Anne Stakes and Juddmonte International, was bred by Paul Langsky, who is one of the owners involved with the four-year-old.

Declaration Of War stood his first season at Coolmore’s Irish base in 2014 before transferring to the operation’s Ashford Stud in Kentucky a year later. He stood this season at the Shizunai Stallion Station in Japan and based on Tuesday’s result, it would be no surprise if he were to shuttle to Australia again.

There was unfortunate news after the race regarding Rostropovich, trained by David Hayes and Tom Dabernig, who had sustained a stress fracture to his pelvis. Formerly trained by Aidan O’Brien, the four-year-old is reported to be in a stable condition at the Werribee equine centre. 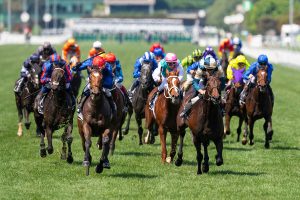