Currie succeeds Guy Henderson, who retires on June 30 next year

Vivien Currie MBE has been announced as the next Chief Executive at Ascot Racecourse, succeeding Guy Henderson, who will retire on June 30, 2022, following his eighth Royal Meeting as CEO.

Currie has been Chief Executive of Hamilton Park Racecourse since 2008, during which time the business has developed a wider commercial focus, diversifying into the award-winning, multi-faceted events business that it is today.

Her achievements at Hamilton Park have ranged from improving the racecourse experience for owners, trainers, jockeys and stable staff to building an award-winning £10 million ‘Hampton By Hilton’ hotel on course.

Within two years of her arrival at Hamilton Park, Vivien was appointed a Non-Executive Director of the Racecourse Association (2010 – 2016), which included four years as Vice Chair. Currie was then appointed as a Members’ Nominated Director of the British Horseracing Authority (2016 – 2019).

Currie received an MBE in the 2020 New Year’s Honours List for her services to racecourse management, business and charity.

Trained as a Chartered Accountant, Vivien spent 12 years with Ernst & Young and subsequently worked for Damovo, graduating to the role of Executive Vice President, Global Sales & Solutions. She then moved into football as Chief Executive of Livingston FC, sitting on the Scottish Football League Management Committee, before moving into racing in her current role.

Sir Francis Brooke Bt., Her Majesty’s Representative and Chairman at Ascot, said: “Vivien’s career is a compelling combination of strategic, commercial and racecourse management experience. This made her the outstanding candidate for this role, in what was a thorough and wide-ranging search conducted with the help of Spencer Stuart.

“She is very familiar with the structure of the British racing industry both from the perspective of Hamilton Park and her terms on both the BHA and RCA boards.

“She has wide-ranging interests in sport and business and has also been a long term and active supporter of Marie Curie Cancer Care. The whole Board is much looking forward to welcoming her to Ascot.

“Vivien will join as CEO designate in April and work alongside Guy in the lead up to the delivery of Royal Ascot in the Platinum Jubilee Year. On 30th June she will take over as CEO when Guy retires at the end of what has been an outstanding tenure.”

Of her new appointment, Vivien said: “I am delighted to have been chosen as the next Chief Executive of Ascot Racecourse and to be joining the team for what will be a very exciting year ahead. This role is a culmination of all the experiences I have had in my professional career to date and I am looking forward enormously to working with Guy in the build up to Royal Ascot in June.” 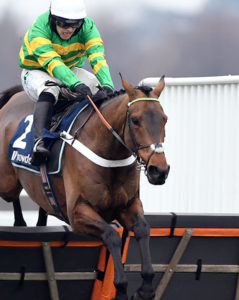 Up Next
Successful return for Champ