Robbie Power’s quite remarkable season kept on rolling at the Fairyhouse Easter Festival, as he took out the €500,000 BoyleSports Irish Grand National aboard the seven-year-old Our Duke.

The 28 runners were taken along early by Stellar Notion and last year’s winner Rogue Angel, with Our Duke appearing prominently under Power on the outside.

As the race hotted up down the back for the last time, the first three – Stellar Notion, Fletchers Flyer and Our Duke – established a healthy lead on the rest.

Jessica Harrington’s gelding hit the lead before four out with the rest of the field gaining ground. Power kicked on at the home turn taking a three-length lead.

He kept up the gallop strongly and a fluent jump at the last saw him maintain an unassailable advantage taking the first prize by 14-lengths.

A son of Oscar, Our Duke wins one of Irish racing’s most prestigious steeplechases on just his fourth start over fences.

He earmarked himself as a contender for the three mile and five furlong contest when running out a good winner of a Grade 1 Novice Chase at Leopardstown back in December.

“This means so much to me, it’s my local racecourse and I was second in it a few years ago so this is nice compensation. He is a hell of a good horse. He is very, very good,” reflected Power.

“He made a few novicey little mistakes, but full credit to all the team at Commonstown. Jessie has done some job to train this horse to win an Irish National on only his fourth start over fences.”

The Commonstown handler has enjoyed her finest season to date in what has become a lengthy career. This, her first Irish National success, follows on from her first triumph in Cheltenham Gold Cup last month.

Harrington said: “I haven’t really taken the whole thing in. He kept on going and stayed brilliantly. For a horse only having his fourth run over fences it was a pretty good performance.

“We were always jumping out to the wide outside and always up there. I don’t know how far he won but by that time I was shouting down Arthur Moore’s ear.”

He kept on going and stayed brilliantly

Earlier in the afternoon, the Willie Mullins-trained Renneti got back to winning ways by landing the Grade 2 Strawberry Hurdle over two and a half miles.

In the hands of Ruby Walsh, the eight-year-old travelled well in rear early on and was allowed to stride on from four out.

He kept on strongly in the home straight to win by nine-lengths from De Plotting Shed. 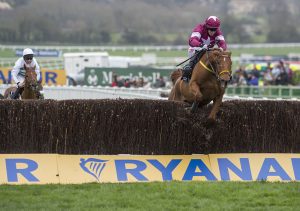 Up Next
Respect ousts wayward Yorkhill