I could add that all four were also precocious, with Caravaggio gaining his first success on April 18, Ardad on June 8, Cotai Glory on July 10 and Profitable on July 24. Galileo Gold, the other member of the top five, may be best remembered as a top miler but don’t forget that he was also smart at two, when he gained the first of his three consecutive juvenile victories as early as June 9.

However, speed and precocity aren’t essential to success as a first-season sire, as two Juddmonte-bred sons of Dubawi – New Bay and Time Test – have been demonstrating over the last two seasons.

New Bay ran only once as a two-year-old, making his debut as late as November 25, when he finished a two-length second over a mile on Chantilly’s all-weather track. Whereas the winner, a Cape Cross filly called Urjuwaan, failed to earn black type, New Bay thrived as a three-year-old, to the extent that he won the Prix du Jockey-Club after a highly creditable second in the Poule d’Essai des Poulains and ended his season with third place behind Golden Horn and Flintshire in the Arc.

Unfortunately, he failed to win another Group 1 at four and, instead of joining the Juddmonte stallion roster, New Bay was sold to stand at Ballylinch Stud, who have done a very good job with him. He took high rank among the first-crop sires of 2020, notably enjoying Group success with New Mandate and Saffron Beach. Saffron Beach has gone on to finish second in the 1,000 Guineas before winning the Group 3 Atalanta Stakes and Group 1 Sun Chariot Stakes, and a very admirable total of ten members of New Bay’s comparatively small first crop have so far attained Racing Post ratings of 100+. 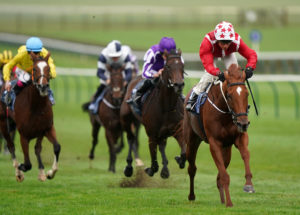 The fact that his second crop numbers little more than 60 foals hasn’t stopped him confirming his talent. Bayside Boy became the first Group winner from this crop when he narrowly defeated Reach For The Moon in the Group 2 Champagne Stakes, and there is a pleasing support team, featuring Cresta, Mise Le Meas, Adjuvant, Daisy Peers and New Pursuit. He has seven winners from 21 starters, and more can be expected throughout the autumn.

Time Test wasn’t without talent as a two-year-old, but his record of one win and two seconds was good enough to earn him a Timeform rating of only 91p. In other words, he appeared to be something of an underachiever for a son of two Group 1-winning two-year-olds. Dubawi had been rated 123p as a juvenile, while Time Test’s dam Passage Of Time was rated 113p after winning three of her four starts.

The following year saw Time Test fulfil much of the potential of his first-rate pedigree. His smooth victory in the London Gold Cup suggested he would hold his own in much stronger company and he duly landed the Group 3 Tercentenary Stakes at Royal Ascot and the Group 2 Joel Stakes. Further Group successes followed as a four-year-old, including a victory over Mondialiste in the Group 2 York Stakes. Unfortunately, his York success marked his final appearance in Britain and he was transferred to Chad Brown in the US.

Time Test seemed well qualified to gain the top-level success that had eluded him in Europe, but he continued to frustrate at the top level, finishing second in each of his three starts, including two Grade 1s. His final defeat, by just over two lengths in the Fourstardave Handicap, was made to look better when the winner, World Approval, went on to take the Breeders’ Cup Mile.

So Time Test failed to win a Group or Grade 1 race, which is one of the main criteria that Juddmonte tries to uphold when retaining stallions. That said, Time Test’s broodmare sire Dansili also lacked a Group 1 success on his CV and that didn’t stop him becoming a major success.

Time Test was instead retired to the National Stud, at a fee of £8,500, and his early runners suggest that he is going to prove a real asset to connections. He has already enjoyed black-type success with three of his daughters – Romantic Time (Group 3 Dick Poole Stakes), Rocchigiani (Group 3 Zukunftsrennen) and Tardis (Listed St Hugh’s Stakes) – and a fourth daughter, Sunset Shiraz, was third in the Group 1 Moyglare Stud Stakes. That’s excellent going for a crop numbering only 74, and it was no surprise when a breeding right to Time Test sold for 85,000gns on September 15. He looks set to play his part in adding to Dubawi’s burgeoning reputation as a sire of sires. 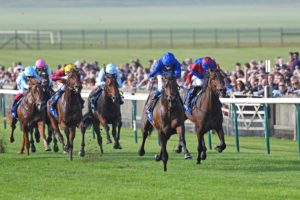 Up Next
Native on Guineas trail after Darley Dewhurst triumph