Connections of UAE Derby-winner Thunder Snow remain none the wiser after the colt seemed to pull himself up just after the start of this year’s renewal of the Kentucky Derby.

The son of Helmet was going into the prestigious $2 million contest on the back of a gutsy win on the surface in Dubai, and was touted as possibly being able to give His Highness Sheikh Mohammed a breakthrough success in a race which has alluded him thus far.

With French talisman Christophe Soumillon aboard, Thunder Snow broke from the two gate and within 150 yards began bucking and kicking becoming virtually unrideable.

He was subsequently pulled up as the remaining 19 runners galloped off to seek victory in the first leg of the American Triple Crown.

“He trained so well out there and he’s a beautiful character at home,” said John Ferguson, Godolphin’s Chief Executive and Racing Manager.

“He jumped plunging out of the stalls and was pulled up after 50 yards – you can imagine a two-year-old doing that having his first start but a horse who’s won Group races at Meydan in Dubai and won in France and England?

“Everyone will have a theory but we’ll probably never know what happened.”

A veterinary examination was conducted on the three-year-old immediately after the race but no abnormalities came to light.

Focusing on the race itself, Always Dreaming, one of the leading fancies made it an emotional second triumph in Churchill Downs feature for trainer Todd Pletcher.

Pletcher, who hasn’t enjoyed the best of luck in the Kentucky feature, did take the plaudits seven years ago with Super Saver.

Always handy with 2011 winning rider John Velazquez, the emphatic Florida Derby scorer kicked clear in the stretch in similar fashion striding out to a two and three quarter length success. 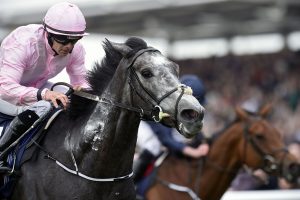 Up Next
Third Guineas double for O'Brien