Churchill delivers on his D-Day
News

Aidan O’Brien created history once more on the final day of the Qipco Guineas meeting, notching a third Guineas double courtesy of his grey filly Winter.

A daughter of Galileo, she tracked one of her stable companion’s Hydrangea who led the 14-strong field in the early stages.

As the pace began to lift into the final three furlongs, Wayne Lordan aboard Winter loomed large travelling well on the outside.

The duo hit the front two furlongs out and stole a march on their opposition. Out of the dip, Winter kept on strongly pursued hotly by John Gosden’s Daban under Frankie Dettori.

Ballydoyle’s first string, Rhodedendron, who met trouble in running at around the cut-away, picked up well to take second but could only get to within two lengths at the post.

Having only linked with the mighty Ballydoyle operation in January, Lordan enjoys his seventh win at Group 1 level.

His last two successes at the highest level came with a previous winner of this race, Legatissimo, another former in-mate of the retired David Wachman, who trained Winter during her first three runs last year.

“I went forward early because she’s a filly that gallops,” reflected Lordan. “I knew the mile here would suit her, she galloped out to the line well she’s a progressive filly.

This win gives O’Brien a fourth win in the one mile contest for fillies and completes another fantastic weekend.

Virginia Waters was his first back in 2005 while multiple Group 1-winner Minding became his third when running away with the race 12 months ago.

O’Brien said: “David [Wachman] told us when she came last year that he thought she was really good and that she would be a Classic mare.

“She had a lovely run at Leopardstown, she’s a fine big mare and has been doing well every week.”

Earlier in the afternoon, Michael Tabor’s silks were carried to victory by Somehow in the Group 2 Charm Spirit Dahlia Stakes for fillies and mares.

The beautifully-bred four-year-old was held up in the hands of Ryan Moore but travelled strongly throughout.

She came through with a sustained challenge inside the final furlong and won going away by just over three lengths. 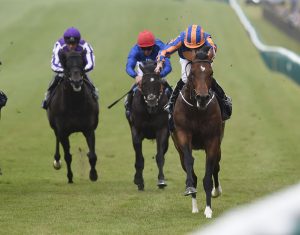 Up Next
Churchill delivers on his D-Day