Arbiter, a Kingman half-brother to Group 1 winner Coronet, bids for the first victory of his career in the seven-furlong novice contest at Southwell (aw) today.

The John Gosden-trained juvenile made his debut over six furlongs at Wolverhampton earlier this month when he was beaten two and a quarter lengths by the Richard Hughes-trained Waddat.

A homebred for Denford Stud out of the Darshaan mare Last Second, Arbiter is also a half-brother to the Group 1-placed Midas Touch, while this is the further family of Group/Grade 1 winner Aussie Rules.

His opponents include the Sir Mark Prescott-trained Cedar Cage, who was last seen finishing second at Chelmsford earlier this month, and the Scott Dixon-trained Alex Gracie, who has been third on both of her starts this season.

Kempton also race on the all-weather today while there are jumps fixtures from Hereford and Wetherby, where the ROA stages another of its popular Industry Ownership Days. Over in Hong Kong, Happy Valley holds a nine-race Flat card.

Laurens to visit No Nay Never

John Dance’s star mare Laurens, the winner of six Group 1s during her career, will visit Coolmore’s No Nay Never for her first covering as a broodmare in 2020.

The news was announced in a tweet through the Dance Thoroughbred’s Twitter account and said: “As we keep both the fillies and first colts that we breed, we were looking to breed a racehorse rather than a commercially attractive sales horse as her first would be kept regardless of what she produced.”

The 2019 edition of the Tattersalls December Foals Sale begins a four-day run with a total of 1,125 lots catalogued to go under the hammer.

Key lots to keep an eye out for include the only Galileo on offer at Park Paddocks, who is a half-brother to Poule d’Essai des Pouliches heroine Precieuse (Lot 971), and the first foal out of St Leger winner Simple Verse, a Frankel colt, offered as Lot 1,025 by Tweenhills Farm and Stud. 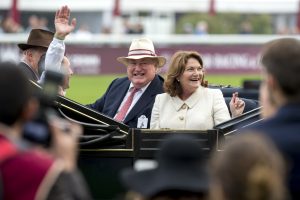