Gordon Elliott looks to continue his excellent recent record in the Troytown Handicap Chase (3m) at Navan in Ireland today.

Navan is the trainer’s local track and he has won the contest four times in the last five years. Elliott runs seven this time including Ravenhill, who was beaten a head by Poker Party in the Kerry National in September.

With Exeter’s card lost to waterlogging, Uttoxeter is the only other meeting today.

Altior’s unbeaten run came to an end in the Grade 2 Christy 1965 Chase (2m5f) at Ascot on Saturday when the Paul Nicholls-trained Cyrname produced an impressive display to run out a ready winner of the contest.

The race was billed as a heavyweight clash between Patricia Pugh’s superstar, trained by Nicky Henderson to win 19 races in a row, and the young pretender Cyrname, who the BHA had rated a pound higher than Altior following his demolition of Waiting Patiently in the Grade 1 Ascot Chase (2m5f) last season.

With only three runners going to post, Cyrname took up his usual position at the head of proceedings while Altior was unable to make a dent in his rival’s lead. Turning for home, Altior’s jockey Nico de Boinville was more animated in the saddle compared to Cyrname’s rider Harry Cobden.

Cobden guided his mount safely over the final two fences to score by two and a quarter lengths, with the pair 63 lengths clear of the Dan Skelton-trained Solomon Grey.

Also at Ascot on Saturday, the Harry Fry-trained If The Cap Fits took the spoils in the Grade 2 Coral Hurdle (2m3½f).

The Colin Tizzard-trained Lostintranslation continued his upward trajectory on Saturday to claim the Grade 1 Betfair Chase (3m1½f) at Haydock under Robbie Power.

The seven-year-old was up against the Nigel Twiston-Davies-trained Bristol De Mai, who had won the contest for the previous two years, but the younger horse had his measure, winning by a length and a half, with Frodon finishing a distant third. 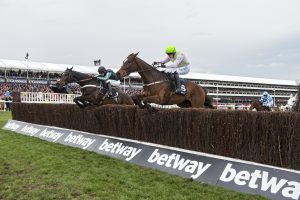