A field of 15 will vie for success in the Unibet Greatwood Hurdle including the Fergal O’Brien-trained Benny’s Bridge, who was an impressive eight-length winner at the Gloucestershire track last month.

Cheltenham’s card also hosts the Grade 2 Sky Bet Supreme Trial Novices’ Hurdle (2m) where the Jamie Snowden-trained Pacify bids to record a sixth victory on the bounce and the biggest success of his career to date. The seven-year-old is owned by the Duchess of Cornwall and Chips Keswick.

Away from Cheltenham, there are jumps cards from Cork (Ireland), Punchestown (Ireland) and Fontwell.

Having been brought down in last year’s BetVictor Gold Cup (2m4f), the Kerry Lee-trained Happy Diva suffered no such bad luck in Saturday’s edition of the race and battled to a neck success in the Grade 3 chase at Cheltenham.

Favourite Slate House departed at the second-last fence leaving Happy Diva and Brelan D’As to fight out the finish. Ultimately it was the mare who prevailed under a fine ride from jockey Richard Patrick.

The 2015 Champion Hurdle hero Faugheen was one of Saturday’s most popular winners when he made a successful chasing debut at Punchestown at the age of 11.

There was one worrying moment for Rich Ricci’s charge when he blundered at the first ditch on the final circuit but once jockey Paul Townend recovered, the pair scooted clear to win by seven and a half lengths.

Saldier, who had not been seen since falling in the Fishery Lane Hurdle at Naas last year, quickened in the home straight before fending off Petit Mouchoir by a length and a half. Klassical Dream could finish only third.

Invincible Army’s debut fee has been set at €10,000 for the 2020 breeding season as Yeomanstown Stud published the prices for its five-strong roster on Saturday.

The operation’s supremo is Dark Angel, the sire of Nunthorpe winner Battaash, who will stand at an unchanged fee of €85,000 for the third year in a row. 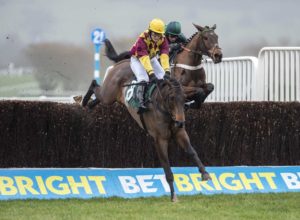