Racing goes ahead at Cheltenham today and Sunday after the track passed an inspection on Friday afternoon. Conditions are described as soft, heavy in places.

Today’s feature race is the Grade 3 BetVictor Gold Cup and 18 runners are set to contest this 2m4f handicap chase. Siruh Du Lac, a winner at the Cheltenham Festival in March, makes his seasonal reappearance under Lizzie Kelly, who returns after breaking her arm in a fall at Exeter last month.

Novice Slate House, who scored for Colin Tizzard and Robbie Power at the October meeting, should go well again while near the bottom of the weights, the David Pipe-trained Warthog – a winner on soft ground on his first run last season – could feel the benefit of a wind operation and go well at big odds under David Noonan.

The Fergal O’Brien-trained Champagne Well bids to follow up his course and distance victory last month in the Grade 2 Ballymore Novices’ Hurdle (2m5f), while Bill and Tim Gredley’s Allmankind made an impressive debut over hurdles at Warwick eights days ago and steps up in class for the Grade 2 JCB Triumph Trial Juvenile Hurdle (2m½f).

Rest of the day’s action

Along with Klassical Dream, Willie Mullins fields Saldier and Sharjah in the Morgiana – all three are course and distance winners – with the field completed by the Henry de Bromhead-trained Petit Mouchier and Yaha Fizz from the Eamon Delany stable.

Lingfield stages an eight-race card on the all-weather that gets underway at 11.55am. Cambridgeshire hero Lord North, successful in a Listed contest at Newmarket earlier this month, is the star act and contests the Betway Churchill Stakes (1m2f) against six rivals, including Pactolus, the winner of 12 races on artificial surfaces.

There are also jumps meetings at Uttoxeter and Wetherby while Wolverhampton (aw) race this evening.

Group 2 winner Inns Of Court will stand his first season at Tally-Ho Stud at a fee of €7,500.

The son of Invincible Spirit raced in the blue of Godolphin for trainer Andre Fabre and secured his biggest win this season in the Prix du Gros-Chene over five furlongs aged five.

Inns Of Court scored on his only start as a two-year-old and was narrowly denied twice at the top level, being beaten a short-head in both the Prix Jacques le Marois and Prix de la Foret.

He joins Kodiac, Galileo Gold, Kessaar, Cotai Glory, Vadamos and Mehmas on the Tally-Ho roster for 2020.

The Showcase & Awards, run by the Racecourse Association (RCA), celebrate excellence and innovation amongst British racecourses. This year’s event was staged in partnership with Moët Hennessy, Great British Racing and the Racing Post.

Norman Gundill MBE, Managing Director of Pontefract racecourse, said: “We are thrilled to be named as the Showcase Champion racecourse. To have been named as champion by a panel of expert judges and amongst our peers means the world.

“I believe that with Pontefract winning the Champion accolade it shows that any racecourse can achieve great things with the right mindset. We’re a proud member of Go Racing in Yorkshire and strive to give our customers the best day out possible. My thanks must go to my incredible team.” 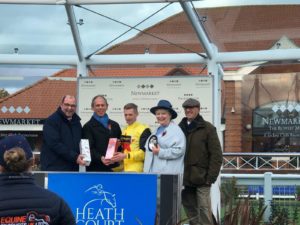 Up Next
Royal dreams with Kenzai