Douvan, owned by Rich Ricci, was last seen finishing second to Un De Sceaux in the Champion Chase at the Punchestown festival in 2018.

The nine-year-old will face four rivals in the 2m4½f event including Grade 1 winner Monalee, representing Henry de Bromhead and the Jessica Harrington-trained Jett, narrow winner of a Grade 3 at Punchestown on his last start.

Taunton hosts a jumps card today that features the Thoroughbred Breeders’ Association Mares’ Handicap Hurdle (2m3f), with the nine-runner field including the Neil Mulholland-trained Runasimi River, who will be bidding to bring up a hat-trick of wins.

There are also jumps meetings from Sedgefield and Ludlow while there are Flat fixtures at Al Ain in the UAE and Fontainebleau in France.

Three-time Group 1 winner Advertise will stand his debut season at £25,000 after the National Stud in Newmarket revealed the fees for its five-strong roster for the 2020 breeding season.

Irish St Leger winner Flag Of Honour, who will stand as a dual-purpose stallion, is introduced to breeders at a fee of £4,500.

Aclaim and Time Test, who are both entering their third season at stud, have had their fees held at £9,500 and £8,500 respectively. The roster is completed by Rajasinghe and the Coventry Stakes winner will stand 2020 at an unchanged fee of £5,000.

Tim Lane, Stud Director, said: “Advertise possessed the perfect combination of speed, precocity and toughness. His three Group 1 victories cemented him as one of the best sprinters of his generation and we are very confident he has the physical attributes to be the complete package for breeders.”

The operation’s flagship sire Dandy Man, the sire of La Pelosa, Lady Kaya and Peniaphobia, will stand at a career-high fee of €15,000, having stood this year at €12,500.

Elzaam and Prince Of Lir complete the roster and they have had their fees held at €4,000. 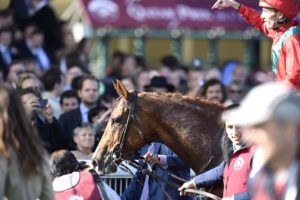