Top-class mare Apple’s Jade is one of the stars appearing on a quality card at Navan today.

The Gordon Elliott-trained seven-year-old makes her seasonal debut in the Grade 2 Lismullen Hurdle (2m4f), a race she has won for the past two years.

Opposing Gigginstown’s ten-time Grade 1 winner are Magic Of Light, last seen chasing home Tiger Roll in the Randox Health Grand National in April, and Bacardys, runner-up to Unowhatimeanharry in the Grade 1 Champion Stayers Hurdle at Punchestown in May.

The Listed Virgin Bet Future Stars Intermediate Chase is the feature event at Sandown today and Santini, one of last season’s leading novice chasers, takes on three opponents in the three-mile contest.

Second to Topofthegame in the Grade 1 RSA Insurance Novices’ Chase at the Cheltenham Festival, Santini is set to take high rank among this season’s staying chasers. Talkischeap, who finished the last campaign with an impressive victory in the bet365 Gold Cup, and dual chase winner Steely Addition provide stern opposition.

They also race at Ffos Las today, with the Welsh track staging a seven-race card.

A runner-up in Grade 1 company for previous trainer Francois Nicolle, Pic D’Orhy ran only once in Britain last season, finishing unplaced behind Pentland Hills in the Triumph Hurdle.

The pick of the opposition in the 2m3½f hurdle for four-year-olds could be the Nicolle-trained L’Autonomie, a daughter of Blue Bresil searching for a four-timer, and Cotee Sud, successful in her last two races at Auteuil for trainer Arnaud Chaille-Chaille.

Present Man was unable to land the hat-trick in the Badger Beers Silver Trophy at Wincanton on Saturday but his trainer Paul Nicholls was still able to celebrate after stable companion Give Me A Copper came home in front in the 3m1f handicap chase.

Nine-year-old Give Me A Copper jumped well under Harry Cobden and had enough left in the tank to repel the challenge of Soupy Soups, recording a neck success.

Fusil Raffles looks a live Champion Hurdle contender after landing the Grade 2 Elite Hurdle for the Nicky Henderson stable while the Colin Tizzard-trained Reserve Tank put in a great round of jumping under Robbie Power to take the Grade 2 Rising Stars Novices’ Chase.

Wand is magic down under

The Aidan O’Brien-trained Magic Wand claimed Group 1 honours in Australia with a decisive success in the Mackinnon Stakes at Flemington under Ryan Moore.

Making her eleventh start of the year, Magic Wand had yet to enter the winner’s circle in 2019 despite some brave efforts in defeat. The daughter of Galileo put that right with a length success over favourite Melody Belle and is set to stay in training next year. 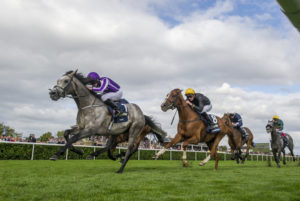