Gosden trained Great Heavens to the biggest win of her career in 2012 and is well placed to guide her two-year-old filly in her career. She is bred on the same Dubawi x Galileo cross that has yielded German Group 1 hero Ghaiyyath and leading first-season sire Night Of Thunder.

Sun Bear, who races for exors of the late Lady Rothschild, will face 11 rivals including fellow debutant Frankenstella, a daughter of Frankel, and the Mark Johnston-trained Warne’s Army, who was last seen finishing third in a 7f novice stakes at Musselburgh last month.

Interconnected out for the season

Darren Yates’ Interconnected, the most expensive jumps horse bought at auction having cost £620,000 in May, is out for the season after suffering a minor injury.

The five-year-old Network gelding won his point-to-point by 20 lengths in February 2018 before running second at Newbury in March on his debut under rules.

Trainer Dan Skelton told the Racing Post: “It’s a small tendon strain. It’s not the end of the world, and the sensible thing is to give him a year off.

“He’s a very, very big horse, and having that time off won’t do him any harm. It’s a shame for Darren, but it’s only a little injury and there is plenty of time for the horse.”

Janika notched his first win on British shores when he was a convincing winner of the Grade 2 Haldon Gold Cup at Exeter on Tuesday.

The six-year-old had joined trainer Nicky Henderson last year having been an impressive performer in France for Guy Cherel. Owned by Simon Munir and Isaac Souede, Janika had finished second on three occasions last season.

Destrier’s bad mistake three fences from home saw Janika take the lead and he stayed on well to beat the Paul Nicholls-trained Dolos.

Jockey Daryl Jacob said: “He gave me a very good feel and we were happy enough with his homework. Coming back in trip was a bit of a gamble but I knew he would be fine, as he’s a strong traveller.” 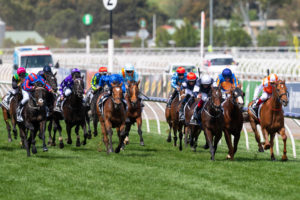 Up Next
Vow lands Melbourne Cup