God’s Own contests the Haldon Gold Cup (2m1½f) at Exeter for the fourth time in his career and is bidding to secure a third victory in the Grade 2 event.

The 11-year-old, trained by Tom George for the Crossed Fingers Partnership, first won the contest in 2014. He returned a year later to defend his crown but could manage only third behind Vibrato Valtat.

Last year God’s Own produced a determined performance to defeat Ozzie The Oscar by half a length. If he were to be successful today, he would equal the record of three wins by the Nicky Henderson-trained Travado.

Tom George, speaking on his website, said: “He might be getting on a bit but he seems in great form. He’s been a grand horse for his owners and he showed he can still mix it with the best when ending last season by finishing third behind Altior, beaten only five and a half lengths, in the Grade 1 Celebration Chase at Sandown.

“As usual, Paddy Brennan rides God’s Own, so we’re hopeful of a big run in a race we’ve been lucky enough to win three times in the last five years.”

God’s Own will face five rivals including last season’s Peterborough Chase winner Charbel and Janika, who was last seen finishing fourth in the Grade 3 Topham Chase at Aintree in April.

The Melbourne Cup was run in the early hours of this morning at Flemington. Will Cross Counter have secured back-to-back victories, or will Japanese raider Mer De Glace have added to his win in the Caulfield Cup?

With Fairyhouse’s fixture abandoned due to waterlogging, the rest of today’s action comprises all-weather meetings from Southwell and Kempton, while Saint-Cloud in France stages two Listed races.

Prix du Jockey Club winner Study Of Man has had his introductory fee set at £15,000 at Kirsten Rausing’s Lanwades Stud.

The son of Deep Impact joins German Derby hero Sea The Moon on the roster – the son of Sea The Stars will command a fee of £15,000 for the sixth year in a row.

Breeders’ Cup Turf Sprint scorer Bobby’s Kitten has his first crop of two-year-olds hit the track next year and the son of Kitten’s Joy will stand at £8,000 in 2020, down from £10,000 this year.

Completing the Lanwades roster for 2020 is Sir Percy, sire of Group 1 winners Sir John Hawkwood and Wake Forest. The son of Mark Of Esteem has had his fee held at £7,000. 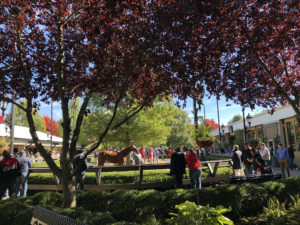 Up Next
Photo Call set to headline