Lostintranslation was one of last season’s leading novice chasers and the seven-year-old makes his seasonal reappearance in the Listed Colin Parker Memorial Intermediate Chase (2m4f) at Carlisle today.

The Paddy Power Cork Grand National (3m4f) is the feature race on Cork’s card and 16 runners are set to go to post for this marathon contest.

The Red Menace, trained by Noel Meade, is only a five-year-old but looked to relish a staying test and testing ground when romping home by 21 lengths in a 2m6½f chase at Galway last month.

A morning inspection will determine whether or not Naas’ final Flat fixture of the year can go ahead. Willie Mullins will be hoping the card gets the green light; he is set to saddle eight runners in the valuable Daragh Fitzpatrick & Colm White Local Bookmakers November Handicap (1m6f) including the five at the top of the weights, headed by Cesarewitch hero Stratum.

There is also jumps action at Huntingdon today, with an interesting eight-race card at the Cambridgeshire venue.

Trainer Joseph O’Brien enjoyed his first Breeders’ Cup triumph when Iridessa claimed the Filly & Mare Turf, defeating Vasilika by a neck under Wayne Lordan with favourite Sistercharlie back in third. It was the only European-trained success at this year’s championships.

Irad Ortiz Jnr stole the show with three Grade 1 wins, spearheaded by Vino Rosso’s decisive success in the Classic, as Todd Pletcher’s charge defeated McKinzie and Higher Power. He also struck on Bricks And Mortar in the Turf and Spun To Run in the Dirt Mile.

Joel Rosario also enjoyed a treble on the Santa Anita card, kicking off with Mo Forza in the Grade 2 Twilight Derby before Covfefe (G1 Filly & Mare Sprint) and Uni (G1 Mile) earned the rider two strikes at the top level.

Staying was the name of the game at Wetherby on Saturday and Ballyoptic relished the testing ground to claim the feature race, the Grade 2 Charlie Hall Chase, for the father-and-son team of Nigel and Sam Twiston-Davies.

The Grade 1 Betfair Chase at Haydock later this month could be on the cards for the talented nine-year-old, who saw off Elegant Escape by three and three-quarter lengths as favourite La Bague Au Roi failed to finish.

Earlier on the card, the McNeill family’s The Worlds End made all to defeat Unowhatimeanharry by five lengths in the Grade 2 bet365 Hurdle.

At Newmarket, the Roger Teal-trained Kenzai Warrior made it two from two in the Group 3 Horris Hill Stakes for owner Rae Borras, while Born With Pride made a successful debut in the Listed Montrose Fillies’ Stakes for the Tsui family and trainer William Haggas.

Mount Nelson, a high-class performer on the track and sire of top-level winners under both codes, has passed away aged 15. He had been suffering from lymphangitis.

Bred by Cliveden Stud and owned by Coolmore during his racing career, Mount Nelson was a dual Group 1 winner, taking the Criterium International at two and the Coral-Eclipse as a four-year-old.

The son of Rock Of Gibraltar moved to Boardsmill Stud in Ireland in 2017, where he covered both Flat and jumps mares. 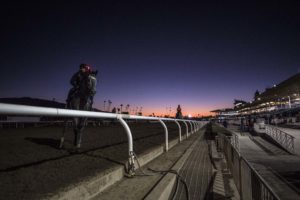