Almighwar will become the first progeny of Taghrooda to hit the racetrack when he makes his debut in the Matchbook EBF Future Stayers Novice Stakes (1m) at Newmarket today (4.45pm).

John Gosden will handle the career of the Sheikh Hamdan-owned colt, having trained his outstanding dam to win twice at the highest level, in the Investec Oaks and King George VI and Queen Elizabeth Stakes.

Almighwar, a son of leading sire Dubawi, will face 13 rivals including Solar Screen, a Golden Horn half-brother to Cheveley Park Stakes heroine Lumiere, who was purchased by Roger Varian for 210,000gns at last year’s Book 1 sale.

There are all-weather meetings at Kempton and Wolverhampton (evening) and jumps action at Worcester and Fontwell. Navan stages a Flat fixture in Ireland.

A €35,000 daughter of Starspangledbanner bought by Powerstown Stud topped the second and final day of the Goffs Autumn Yearling Sale on Tuesday.

The filly is the third foal out of the Cape Cross mare La Femme and is from the family of the Group 3-winning Nick’s Nikita.

The horses-in-training session was topped by Listed winner Shelir. From the popular Aga Khan draft, the three-year-old was bought by Jason Kelly for €70,000.

“With the world in a state of some flux with Brexit, economic uncertainty and so many other factors that would at least suggest some contraction, it was extremely heartening to witness a trade of vibrancy and energy from start to finish.

“Our horses-in-training section is one we would dearly love to develop as every year we prove its worth with the small numbers we present.

“Trade was strong for the catalogue assembled and the figures simply reflect the vagaries of horses in training sales rather than any particular issues.”

Gleneagles’ brother, Group 2 winner The Taj Mahal, will begin stallion duties at Haras de la Haie Neuve in France next year. He will stand at a fee of €4,000.

Tangi Saliou of Haras de la Haie Neuve told Jour de Galop that the deal to secure The Taj Mahal was worked on by himself, Alain Regnier and Emmanuel de Seroux.

Saliou said: “We will strongly support him as we always have done with our stallions in the past. He will arrive next Saturday and will be available to view during the Arqana breeding-stock sales.” 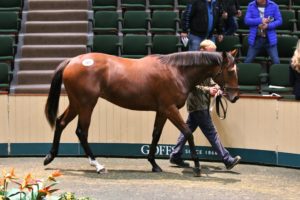