The curtain closed on Book 3 of the Tattersalls October Yearling Sale on Friday with the auction headed by a 145,000gns daughter of Territories, bought by Anthony Coleman on Thursday.

Consigned by Richard Kent’s Mickley Stud, the filly is a half-sister to Group 3 winner Breathtaking Look, and her price tag was a record for a filly at Book 3.

The Tattersalls October Yearling Sale concludes with Book 4 beginning at 10am today.

The catalogue for the Goffs November Breeding Stock Sale was released on Friday with 367 lots set to go under the hammer over two days from November 21.

Highlights include Height Of Elegance, a half-sister to Listen and the Group 1-producing dame Sequoyah offered in foal to Caravaggio (Lot 861), and Snowflakes, the Galileo sister to multiple Group 1 winner Winter (Lot 997).

Goffs Group Chief Executive Henry Beeby said: “More Group 1 success in 2019 was the pinnacle of another year where we saw progeny of November mares win consistently around the world. Goffs November Breeding Stock is a sale with huge international appeal, and we believe this year’s catalogue is packed with potential.

“We have reduced the numbers slightly this year, with quality over quantity very much in mind, to produce a catalogue of real strength and depth. It will take place immediately after our market leading November Foal Sale Part 1 and will be followed by Part 2 of the foals, resulting in a five-day November Sale that serious buyers simply cannot afford to miss.”

Grade 1 winner Bodemeister will relocate to the Jockey Club of Turkey from WinStar Farm in Kentucky after the ten-year-old was sold to the Turkish operation.

The son of Empire Maker is the sire of Kentucky Derby winner Always Dreaming, the Grade 2 scorer American Anthem and the Grade 3-winning pair Yuvetsi and Once On Whiskey.

Jumps meetings are held at Stratford, Market Rasen and Ffos Las, where the two-mile Welsh Champion Hurdle is the feature event.

The 11 runners include the Paul Nicholls-trained, JP McManus-owned Le Prezien, runner-up to Silver Streak in last year’s renewal, and the Dan Skelton-trained Cheltenham Festival winner Mohaayed, who was an encouraging fifth on his seasonal return at Market Rasen last month. 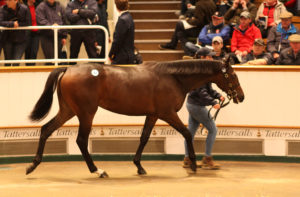