All the news from racing and bloodstock to start your Friday

Stradivarius will face nine rivals in his bid for a repeat victory in the Long Distance Cup (1m7½f) at Ascot on British Champions Day – providing he is allowed to take his chance in the Group 2 contest.

Trainer John Gosden will assess the going prior to racing on Saturday before a decision is made on the five-year-old’s participation. With the round course waterlogged in places, the action switches to the inner track, used for jumping, where the ground is considerably better.

Stradivarius has won his last ten races and his unbeaten season featured a second Gold Cup triumph, helping him land another £1 million cheque from Weatherbys Hamilton for his superiority in the staying ranks.

Bjorn Nielsen’s homebred is set to stay in training next year along with stable companion Enable – a meeting between the two would be the most anticipated racing event of the season.

Nine runners have been declared for the Group 1 Champion Stakes (1m2f), including the mud-loving Addeybb and top older fillies Coronet and Magical. In the Group 1 Queen Elizabeth II Stakes (1m), 16 runners go to post and The Revenant, an easy winner of the Group 2 Prix Daniel Wildenstein on Arc Saturday who enjoys testing ground, heads the betting for French handler Francis-Henri Graffard.

Dean Ivory is hopeful of a big run from Librisa Breeze in the Group 1 Sprint Stakes (6f), which has attracted a field of 17, while Oaks heroine Anapurna, who doubled her Group 1 tally in the Prix de Royallieu at Longchamp earlier this month, heads 12 runners engaged in the Fillies & Mares Stakes (1m3½f).

The big North American stallion studs have revealed their fees for 2020. War Front, sire of this year’s Grade 1 winners War Of Will and Omaha Beach, stays at a fee of $250,000 at Claiborne Farm. New boy Demarchelier, the first son of Dubawi to stand in Kentucky, is priced at $5,000.

Redcar’s abandonment means there is no Flat racing this afternoon, as Fakenham and Uttoxeter stage jumps cards.

This evening, there are all-weather meetings at Wolverhampton, Newcastle and Dundalk in Ireland.

Dundalk’s feature race is the Group 3 Mercury Stakes (5f), in which six of the 14 runners represent British stables, while Wolverhampton’s British Stallion Studs EBF Novice Stakes (1m½f) sees the debut of Godolphin juvenile Maria Rosa, a daughter of War Front who cost $1.75 million as a yearling at Keeneland and is a half-sister to five-time Grade 1 winner Nyquist. 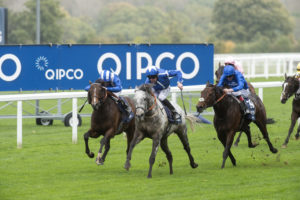 Up Next
Breeze bids for repeat