All the news from racing and bloodstock to start your Thursday

Ascot racecourse has confirmed that the Fillies & Mares Stakes, Long Distance Cup and Champion Stakes will be run on the inner course on Saturday.

Clerk of the Course Chris Stickels made the decision on Wednesday with the round course still waterlogged in places. The inner course’s ground is not so testing, with the current description of good to soft, soft in places.

The running order on Champions Day has also been amended. The Long Distance Cup is now the second race of the day with the Fillies & Mares Stakes following immediately after.

Another winner for American Pharoah

Triple Crown hero American Pharoah supplied the 16th winner from his debut crop of two-year-olds when Ocean Atlantique scored by eight lengths at Saint-Cloud on Wednesday.

Trained by Andre Fabre for the Coolmore partners, the juvenile had made his debut over the same course and distance last month where he was beaten a length by the Pascal Bary-trained Ketil.

Sourced from this year’s Arqana Breeze-Up Sale for €1.1 million by the Broadhurst Agency, Ocean Atlantique is out of the Giant’s Causeway mare Tare Green, herself a half-sister to Grade 1 winner Leroidesanimaux. This is also the family of Juddmonte’s influential blue hen Hasili.

Goffs has published the catalogue for its November Foal Sale online, with 770 lots set to be offered in Part 1 of the sale, which runs from November 18-20. The second part of the sale will have 204 foals go under the hammer on November 22.

Eye-catching entries include the Dubawi brother to Group 1 winner Ghaiyyath (Lot 745), a Gleneagles half-brother to Dewhurst Stakes scorer Intense Focus (Lot 643) and a Profitable filly who is a half-sister to the Group 1-placed and Listed winner Jash (Lot 736).

Goffs Group Chief Executive Henry Beeby said: “Goffs November is simply unmissable for anyone interested in buying a foal, whether they aim to resell or race. While Goffs regularly sells the top-priced foals in Europe, we pride ourselves on providing quality for all buyers whatever their budget.

“This catalogue features many of the best foals to be offered anywhere this year thanks to the incredible support from Irish breeders, as well as a number of select foals from UK vendors, resulting in a catalogue of great strength and depth.”

There are Flat meetings at Brighton, Wolverhampton (aw) and Chelmsford (aw) today.

Race three at Chelmsford is a seven-furlong novice contest for two-year-olds in which Law Of One, a half-brother to Group 1 winner Cloth Of Stars, makes his debut in the Niarchos silks for trainer Sir Michael Stoute.

Jump racing comes from Carlisle, Wincanton and Tramore in Ireland. 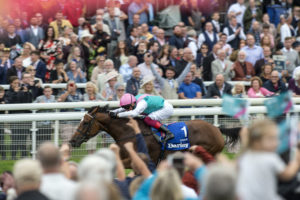