Ferguson ready for next step
News

Enable to stay in training

British racing fans can look forward to the return of superstar Enable in 2020 after it was revealed that Khalid Abdullah’s star mare will stay in training as a six-year-old.

Enable’s main target will again be the Group 1 Prix de l’Arc de Triomphe, a race she won in 2017 and 2018. The daughter of Nathaniel was denied a historic third Arc triumph by Waldgeist earlier this month.

Teddy Grimthorpe, racing manager to Abdullah, said: “She has come out of the Prix de l’Arc de Triomphe in good form and will not race again this year.

“Her racing programme will be determined entirely on her wellbeing, so no racing will be announced at this stage. The Prix de l’Arc de Triomphe remains an important target.”

My Risk on the move to Haras du Lion

Best known as the sire of Grade 1 winner Sire De Grugy, stallion My Risk will move from Haras de Victot to Haras du Lion for the 2020 breeding season.

Francois Thomas, of Haras du Lion, spoke to Jour de Galop and said: “My Risk represents excellent value for breeders looking to use a proven stallion at an affordable price.

“Many industry people in Western France have enjoyed great success with his progeny. That’s why we’re delighted to offer a proven stallion who is attractive to local breeders. He works well with different types of mare, and in particular those from AQPS strains.”

Trainer Jedd O’Keeffe said: “We are very happy with Sam Spinner. He has done plenty of work and plenty of schooling, and we are anxiously looking forward to it.

“The trip is probably a touch on the sharp side for him, but he will enjoy the track and the ground is fine.

“What we want to see from him is a good round of jumping. We know that he is not at his peak yet and hopefully that will come later on in the season, but we want to see lots of promise and aptitude for chasing, which is what we see at home.”

Nottingham’s meeting is subject to an inspection at 8am following the recent spell of wet weather while Flat racing also comes from Kempton (aw), Southwell (aw) and Bath.

The feature race at Bath is the Listed British Stallions Studs EBF Beckford Stakes (1m6f). Diamond Hill landed a Listed prize last time out and will be trying to give Willie Mullins a second win in the contest following True Self’s victory last year.

Over in Ireland, Punchestown hosts a jumps card with two Grade 3 events the headline races. 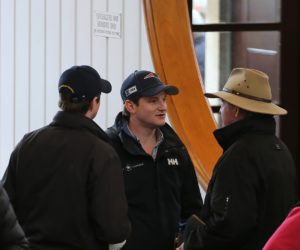 Up Next
Ferguson ready for next step