Five of the best
News

A superb weekend of racing begins with Group-race action at Newmarket, Ascot and Longchamp today.

Laurens, an outstanding performer for owner John Dance and trainer Karl Burke over the past few seasons, makes her final appearance in the Group 1 Kingdom Of Bahrain Sun Chariot Stakes (1m) at Newmarket, a race she won last year, before being retired to the paddocks.

The ground is set to be a good deal more testing than it was 12 months ago, when she held the fast-finishing Happily to score by a head.

The Cumberland Lodge Stakes is one of two Group 3 contests at Ascot today, with seven runners going to post for the 1m4f contest.

Sextant, a four-year-old gelding owned by the Queen, is a course and distance winner who looks on the upgrade but he could meet his match in the shape of Hamdan Al Maktoum’s Faylaq. This rapidly improving three-year-old colt is bred in the purple, by Dubawi out of Arc heroine Danedream, and looks capable of taking the step up to Pattern company in his stride after a facile success last time out.

The Bengough Stakes (6f) has attracted a field of 11. Donjuan Triumphant looks sure to appreciate the testing ground while Tabdeed has won four of his five races and could be a potential star for trainer Owen Burrows.

With £112,000 going to the winner, the bet365 Challenge Cup is the most valuable race on the Ascot card. The seven-furlong handicap sees a field of 17 line up and three-year-old Casanova, trained by John Gosden, looks interesting towards the bottom of the weights.

There is also racing today at Redcar, which stages two Listed races including the valuable Two Year Old Trophy (6f), jumping at Fontwell and an evening meeting at Wolverhampton (aw).

Gowran Park’s NH fixture features the Grade 2 PWC Champion Chase (2m4f), in which Jury Duty looks to have a sound chance for the Gordon Elliott stable.

While Enable is undoubtedly the star attraction at Longchamp on Sunday, Saturday’s card is none too shabby either, with two Group 1s and three Group 2s.

Oaks winner Anapurna turns out in the Prix de Royallieu (1m6f) but faces a tough challenge against compatriot Enbihaar, while the best of the home defence could be the Andre Fabre-trained Musis Amica, who was runner-up to Star Catcher in the Group 1 Prix Vermeille.

Dee Ex Bee gets his chance to win a Group 1, having chased home Stradivarius on his last three starts, in the Prix du Cadran (2m4f). Cleonte, from the Andrew Balding stable, will relish the stamina test and the big local hope, the appropriately named Way To Paris, must have a decent shout too.

There are six Grade 1 races in the USA on Saturday in New York, Kentucky and California.

Jamie Spencer, James Doyle and Wayne Lordan travel to Keeneland for their top-level turf contests, where they will be up against Adam Beschizza, fully settled into life as a jockey in the States.

The Shadwell Turf Mile (1m) is a competitive affair with 14 runners set to start. The Chad Brown-trained Valid Point looks a worthy favourite after his victory over Van Beethoven (again in opposition) in the Grade 1 Secretariat Stakes at Arlington in August.

A son of Exceed And Excel became the most expensive yearling at the Goffs Sportsman’s Sale in 12 years when selling for €135,000 to Joe Foley on Friday. 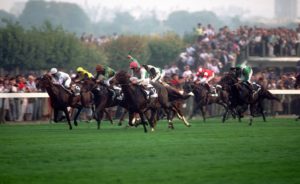 Up Next
Five of the best