By The Owner Breeder staff 24 September 2019

Another stakes winner for Due Diligence

Tom Dascombe continued his fine run of form on Monday when Sir Boris captured the Listed Blenheim Stakes (6f) at Fairyhouse. In the process, the two-year-old became the third stakes winner for his sire Due Diligence.

A homebred for Bob and Pauline Scott’s Parks Farm Stud, Sir Boris showed battling qualities to regain the lead having been headed by the Ger Lyons-trained Soul Search a furlong and a half from home.

Sir Boris soon extended when back in front under Declan McDonogh and scored by a length and a half.

Due Diligence, who was a high-class sprinter, joins fellow freshman sire Night Of Thunder with three stakes winners from their debut crop.

The son of War Front, who finished second in the Diamond Jubilee Stakes in 2014, has stood at Whitsbury Manor Stud since 2016 and his top performers include Group 3 winner Streamline and Listed scorer Good Vibes.

The British Horseracing Authority has extended Musselburgh’s temporary licence as the track continues to search for a new operator.

Last year the BHA granted a temporary licence, which was due to expire next month, after the sport’s governing body stepping in to demand an independent review of the course’s management.

Chelmsford’s card features a fillies’ novice median auction stakes (7f) for two-year-olds and among the 11 runners are the Queen’s Cranberry, a Toronado half-sister to the Listed-placed Make Fast, and Shadwell homebred Taamer. 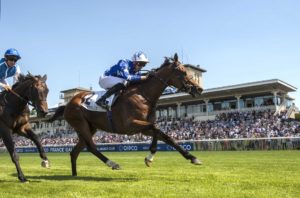