By The Owner Breeder staff 12 September 2019

The Leger Legends charity race generated the most interest on the opening day of Doncaster’s St Leger Festival, won by Dubai Acclaim and Sammy Jo Bell, but proceedings move up a gear today with two Group 2 contests the highlights on a quality seven-race card.

The Park Hill Stakes is the St Leger for fillies and eight runners go to post for the extended 14-furlong event. Anthony Oppenheimer’s homebred Dame Malliot, winner of the Group 2 Darley Prix De Pomone (1m4f) on deep ground at Deauville last month, looks sure to appreciate the step up in trip for the Ed Vaughan stable.

Her biggest danger could be Hamdan Al Maktoum’s Enbihaar, also successful in Group 2 company last time out, in the Qatar Lillie Langtry Stakes (1m6f) at Goodwood. The John Gosden-trained daughter of Redoute’s Choice will have no problems with the trip or ground though as the only four-year-old in the field, she must give 10lb and upwards to her younger rivals.

The two-year-old fillies take centre stage in the May Hill Stakes, which has attracted a field of nine. Boomer, owned and bred by Andrew Black’s Chasemore Farm, recorded a decisive success in Goodwood’s Group 3 Prestige Stakes on her last start and should relish the move up to a mile.

Three fillies boast unbeaten records coming into the race, the once-raced trio of Anna Of Sussex, Cloak Of Spirits and Powerful Breeze. The Mark Johnston-trained West End Girl, owned by Alan and Mike Spence, captured the Group 3 Sweet Solera Stakes (7f) last month and will be looking to give her sire Golden Horn his biggest win to date with his first crop.

Epsom and Chepstow stage afternoon fixtures and Chelmsford (aw) race in the evening, while Listowel holds a mixed card.

Eleven runners will chase immortality in the final Classic of the season, the William Hill St Leger (1m6½f), at Doncaster on Saturday.

Mark Johnston saddles the consistent Nayef Road and the progressive Sir Ron Priestley, whose owner Paul Dean spoke exclusively to Owner Breeder about his chances in the world’s oldest Classic.

The National Hunt sale, comprising 37 two-year-olds and yearlings, is a unique concept in Britain and, perhaps, the first of many such auctions at Futter’s Welshpool premises.

Carl Evans spoke to David Futter ahead of the sale, and you can read the interview here.

Sheikh Mohammed spending $4.1 million on a Curlin colt was the biggest story at Keeneland’s September Yearling Sale this week – until Mandy Pope decided to up the ante, doubling that figure when shelling out $8.2m on a daughter of American Pharoah on Wednesday.

Unsurprisingly, the filly in question has some supremely talented siblings. Her half-sister is Beholder, the outstanding mare who won 11 times at the highest level, while Mendelssohn, winner of the 2017 Breeders’ Cup Juvenile Turf, and Grade 1 scorer Into Mischief, now one of the hottest young sires in the States, are her half-brothers.

Leslie’s Lady, a daughter of Tricky Creek, is the dam of these brilliant runners. Now aged 23, she is owned by Clarkland Farm’s Fred Mitchell, who bought her for $100,000 at Keeneland in 1996.

When you leave the sales ring at $8.2 million, you deserve a few extra pats. #KeeSept pic.twitter.com/chKCHaryPi 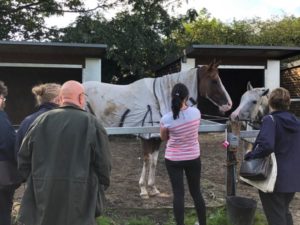 Up Next
Backstage with Brian Ellison and New Beginnings