By The Owner Breeder staff 11 September 2019

A day after securing a half-brother to Nyquist for $2.1 million, Sheikh Mohammed’s Godolphin operation created fireworks at the Keeneland September Yearling Sale on Tuesday when paying $4.1m for a Curlin colt out of Group 1 winner Bounding.

That sum was the highest price paid for a Keeneland yearling since 2010 when an A.P. Indy colt was bought for $4.2m.

Bred by Barbara Banke’s Stonestreet Farm, Coolmore pressed Godolphin throughout the bidding but the latter would not be denied as bloodstock agent Anthony Stroud secured the son of Curlin.

The September Sale continues today and will conclude on September 22.

Group 1-winning filly Pretty Pollyanna has been retired to Bill and Tim Gredley’s broodmare band ahead of a potential visit to Frankel in 2020.

Trained by Michael Bell for the Gredleys, Pretty Pollyanna secured the biggest victory of her career last year when she denied Signora Cabello by three-quarters of a length to claim the Group 1 Prix Morny.

This season, the daughter of Oasis Dream finished second behind Hermosa in the Irish 1,000 Guineas and was last seen filling second place behind Raucous in the Listed Hopeful Stakes at Newmarket last month.

Speaking to the Racing Post, Tim Gredley said: “We’ve decided to retire Pretty Pollyanna as there was only one more race she could go for at Ascot next month and the ground may well have gone against her by then. She was champion juvenile filly in Europe last year when she gave us a great day at Deauville and she owes us nothing.

“It’s been hard for her taking on the colts this year, but she retires fit and healthy and the plan is that she could become a star broodmare for the stud. All being well we’ll take her to Frankel in 2020.”

Here Comes When, the shock winner of the Group 1 Qatar Sussex Stakes in 2017, has been retired.

Trained by Andrew Balding for owners Jim and Fitri Hay, the nine-year-old won nine of his 37 starts and close to £900,000 in prize-money.

Silvestre de Sousa will once again head out to Hong Kong this winter after the Hong Kong Jockey Club granted the three-time champion jockey a licence to ride from November 17 to January 31.

De Sousa is currently on the sidelines having sustained injuries in a fall at Chelmsford last month, and is targeting a return to the saddle early in October.

During his last stint in Hong Kong, de Sousa partnered 44 winners from 298 rides, which included an all-the-way victory on Glorious Forever in the Longines Hong Kong Cup.

Racing returns to Town Moor today to kick off the four-day St Leger meeting, with the Listed Scarborough Stakes and the Leger Legends charity race headlining the card.

Carlisle and Kempton (aw) also stage meetings today while there is a jumps fixture from Uttoxeter.

Over in Ireland, Listowel holds a mixed meeting while racing returns to the beach at Laytown. 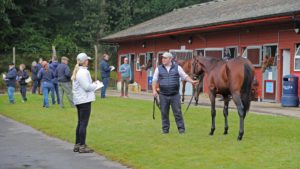 Up Next
Records fall at Tattersalls Ascot Yearling Sale