By The Owner Breeder staff 08 September 2019

Kevin Ryan’s patience with Hello Youmzain was rewarded on Saturday when the three-year-old captured the Group 1 Betfair Sprint Cup at Haydock.

Having bypassed the Nunthorpe Stakes at York following a third-placed effort behind Advertise in the Commonwealth Cup at Royal Ascot, Hello Youmzain clearly benefitted from the break against his ten rivals.

James Doyle made sure Ryan’s charge was at the head of proceedings alongside Invincible Army and as the field darted towards the finish line, Hello Youmzain never looked like he would surrender his lead.

Old favourite The Tin Man, who won the 2018 edition of the race, was a gallant runner-up with German raider Waldpfad back in third.

Streamline’s success in the Group 3 Sirenia Stakes saw him become the first Pattern winner for his sire Due Diligence.

The son of War Front, who stood at Whitsbury Manor Stud at a £4,000 fee this year, is also the sire of the David Evans-trained Listed scorer Good Vibes.

Robin Knipe, who bred top-class hurdler and chaser Thistlecrack with his wife and was owner of Cobhall Court Stud, died on September 1. He was 80.

Knipe is survived by Scarlett, his children Fred and Tracy and grandchildren.

Chelmsford City’s bid to become the first floodlit grass venue in Britain has met with another setback, with news emerging that the project will be delayed at least until the summer of 2021.

Having completed excavations for the mile round track and laid topsoil, officials have yet to decide whether to turf or seed the track.

Whichever they decide, the track will have to bed in and undergo trials in order to stage racing.

Top-level action returns to Longchamp in France today with the Prix du Moulin (1m) the feature race on the card.

Among the runners for the Group 1 are Prix Jacques le Marois scorer Romanised and the Aidan O’Brien-trained Circus Maximus, who was last seen finishing seventh in the Juddmonte International at York last month. 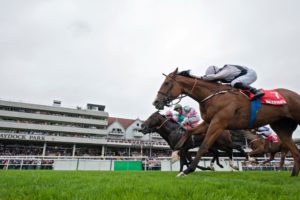