Cheveley Park Stud toasted another Grade 1 jumps success on Sunday when the Gordon Elliott-trained Envoi Allen made it seven wins in a row in the Lawlor’s Of Naas Hurdle.

With Elixir D’Ainay serving it up to the six-year-old and ensuring the 2m4f contest was a true test of stamina, Envoi Allen moved upsides the leader two flights from home. He pulled clear to win by three and a half lengths under Davy Russell.

Elliott distanced talk of Envoi Allen heading to this year’s Champion Hurdle at the Cheltenham Festival in the immediate aftermath but did nominate the Supreme Novices’ Hurdle or the Ballymore as potential targets.

Speaking to the Racing Post, he said: “That was a proper test – they went a proper gallop the whole way and Davy Russell said he learned more today than he has ever done, and he jumped well. It was a fair race.

“He’ll be entered in all the novice hurdles at Cheltenham. He could drop back to two miles or stay at this trip but I wouldn’t see him going over further.”

A filly, she is the first foal out of the winning Exchange Rate mare Foreign Affair, who is a half-sister to the Group 3-winning So Perfect.

“The mare was due to foal on the tenth, so it’s just a few days early but that’s ok. The main thing is that the foal is happy and healthy. So far, everything has gone really well.”

Brian Hughes and Richard Johnson will continue their title battle for the jump jockeys’ championship at Ayr today.

The pair top the standings with 105 winners apiece and it is Hughes who could gain an advantage over the current champion jockey as he has a book of five rides compared to Johnson’s three.

Hughes’ mounts include Ettila De Sivola in the handicap chase (2m½f) and Calix Delafayette, who is returning from a lengthy absence, in the two-mile handicap hurdle. 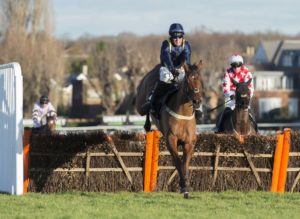