Ascot will hold a precautionary inspection at 8am today to see if the second day of its Christmas meeting can go ahead.

If the fixture is given the green light, the Emma Lavelle-trained Paisley Park is the star horse on show at the Berkshire venue. Racing for Andrew Gemmell, recently voted Owner of the Year at the ROA Horseracing Awards, Paisley Park is bidding to defend his crown in the Grade 1 Marsh Hurdle (3m).

There are jumps meetings from Haydock, Newcastle and Thurles (Ireland) while Lingfield stages an all-weather meeting that features the Listed Quebec Stakes (1m2f).

Simon Munir and Isaac Souede have called upon Barry Geraghty to deputise for the injured Daryl Jacob on Footpad in the King George VI Chase at Kempton on Boxing Day.

The multiple Grade 1 winner is one of seven horses to stand their ground for the Kempton feature at the confirmation stage, the others being Aso, Clan Des Obeaux, Cyrname, Lostintranslation, Thistlecrack and La Bague Au Roi.

Top-class middle-distance performer Crystal Ocean will stand his first season at a fee of €8,000 at The Beeches Stud.

The son of Sea The Stars captured the Prince of Wales’s Stakes this year, defeating Magical and Waldgeist, and was narrowly beaten in both the King George and Juddmonte International.

Also standing their first season as a Coolmore NH sire are Capri, priced at €5,000 at Grange Stud, and Maxios, recruited from Germany, whose fee is €6,000 at Castlehyde Stud. 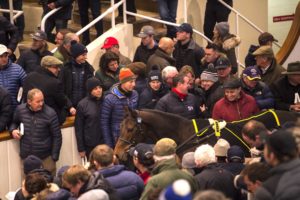