By The Owner Breeder staff 01 September 2019

There’s European Group-race action in France and Germany today with a number of British stables hoping to secure some valuable prizes.

Baden-Baden stages the Group 1 Longines Grosser Preis von Baden (1m4f) in which the Mark Johnston-trained Communique bids to go one better than when touched off in the Longines Grosser Preis von Berlin at Hoppegarten last month. Joe Fanning gets the leg up on the son of Casamento, having ridden him on his last start. Godolphin’s Ghaiyyath, trained by Charlie Appleby, has been absent since finishing third behind Waldgeist and Study Of Man in the Prix Ganay in April.

Both four-year-olds could have their work cut out against German Derby victor Laccario. German racing’s new star has won all four starts this year for trainer Andreas Wohler and receives 7lb from his older vials.

Laccario will be ridden by Panama-born Eddie Pedroza, who made it 17th time lucky in the German Derby, having endured stinging criticism for a number of his previous 16 rides in the Classic.

Moonlight Spirit, fourth in the Queen’s Vase at Royal Ascot, bids to bag a Group 3 prize for Godolphin earlier in the day in the Prix de Lutece (1m7f). James Doyle takes the ride for trainer Charlie Appleby.

The domestic programme sees racing taking place today at Brighton and Worcester (NH) while they also race at Cork in Ireland.

There is Grade 1 action at Saratoga today with the Spinaway Stakes for two-year-old fillies the highlight on the card. 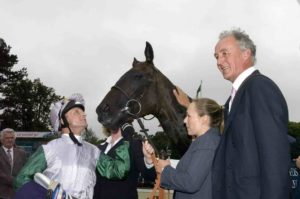 Up Next
Duke of Roxburghe tribute