Godhead, trained by John Gosden, contests the novice stakes over an extended mile on the all-weather at Wolverhampton today.

The three-year-old son of Charm Spirit caught the eye on his debut at Kempton when getting the better of stablemate Sheriffmuir by a neck. He is likely to have improved for that success and will have to be at his best to beat previous winners The Met and Motawaafeq.

Plumpton and Naas (Ireland) race over jumps today. Having passed a 4pm inspection on Sunday, Ffos Las will inspect at 7am to see if its jumps card can go ahead.

The Gordon Elliott-trained Andy Dufresne was beaten for the first time in his career when the Paul Nolan-trained Latest Exhibition stayed on strongly to win the Grade 2 Novice Hurdle at Navan on Sunday.

It was a first Graded winner in over two years for jockey Bryan Cooper who told the Racing Post: “I haven’t been riding many horses like him in the last year, but hopefully he can help bring some more my way.”

Popular dual-purpose performer Lil Rockerfeller will miss the rest of the season having suffered a tendon injury.

Trained by Neil King for owners Davies, Smith, Govier & Brown, the eight-year-old was last seen finishing third behind If The Cap Fits and Call Me Lord in the Grade 2 Coral Hurdle last month. 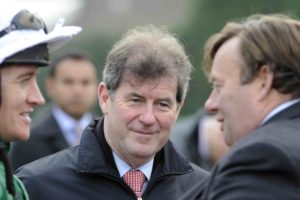