Andy Dufresne is the headline act at Navan today as the five-year-old makes his third start under Rules in the Grade 2 Navan Novice Hurdle (2m4f).

The Doyen gelding romped home on his only point-to-point start, after which he was sold at the 2018 Tattersalls Ireland Cheltenham Festival Sale for £330,000 to JP McManus.

Sent into training with Gordon Elliott, Andy Dufresne sauntered home in a Down Royal bumper before making his hurdling debut at Navan in November, recording an easy success against 17 opponents.

He faces just three rivals today in the shape of stable companion Conflated, the Paul Noland-trained Latest Exhibition, who was runner-up to Abacadabras in a Grade 3 contest on his last start, and Noel Meade’s promising gelding Sixshooter.

Navan’s card concludes with a Listed bumper over two miles. Previous winners Uhtred and Pencilfulloflead head the market though it could be worth keeping an eye on the Bowe family’s Buck Rogers, the only unraced member of the seven-runner field.

Buck Rogers, a four-year-old son of Presenting, is a half-brother to Fayonagh, the brilliant but ill-fated mare who won the Champion Bumper at the 2017 Cheltenham Festival.

Spiritofthegames and Bridget Andrews looked to have the race in the bag after jumping the final fence but the distress signals were out on the run-in and Warthog rallied under David Noonan to take the prize by a head.

Sam Spinner made it three from three over fences with a bloodless success in the Grade 2 December Novices’ Chase at Doncaster while at Newcastle, Raymond Tusk put a disappointing effort in the Melbourne Cup behind him to land a conditions event, a qualifier for the All-Weather Championships. 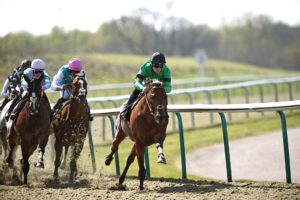 Up Next
Lowe's delight at ROA recognition