Racing resumes at Doncaster today with the track having lost four successive meetings to waterlogging since the Friday of the two-day Vertem Futurity Stakes meeting in October.

Clerk of the Course Roderick Duncan told the Racing Post: “We had eight inches of rain in six weeks and it usually seemed to fall as racedays were approaching. One of our staff has been here 38 years and he had never seen anything like it.

“There was a lot of standing water on the course, and there was a massive lake in the middle of the golf course in the centre of the track. It closed for two or three weeks and only reopened last week.”

Today’s card at the Yorkshire venue is its first jumps card of the season and features seven races including the veterans’ handicap chase (2m7f), where Horatio Hornblower bids to follow up his last time out success.

Cheltenham’s International Meeting gets underway with the Grade 3 BetVictor Handicap Chase (3m2f) the feature contest. The Colin Tizzard-trained West Approach will be hoping for more luck today having unseated jockey Robbie Power at the seventh fence when sent off favourite for last month’s Ladbrokes Trophy at Newbury.

Bangor-on-Dee also race over jumps today while there are all-weather Flat meetings from Chelmsford and Dundalk (Ireland).

Juddmonte has announced the death of its dual Group 1 winner and sire Observatory. The son of Distant View was 22.

A homebred for Khalid Abdullah’s operation, Observatory was trained by John Gosden to win the Lennox and Jersey Stakes as well as the Group 1 Prix d’Ispahan. He is best remembered perhaps for prevailing over Giant’s Causeway in an enthralling battle for the Queen Elizabeth II Stakes in 2000.

Retired to stud, his best-known offspring were four-time Group 1 winner Twice Over and the Group 1-winning sprinter African Rose. He was pensioned from stud duties a few seasons ago.

Simon Mockridge, Juddmonte’s UK Stud Director, said: “Observatory possessed the most wonderful nature and character – he was an absolute delight to have around the stallion yard and even in retirement he played an integral role within the team.

“Our most enduring memory will be his stunning defeat of the ‘Iron Horse’ Giant’s Causeway in the QEII at Ascot, a memorable ride by Kevin Darley bringing him wide in the home straight for victory. He will be sorely missed by all at Juddmonte.” 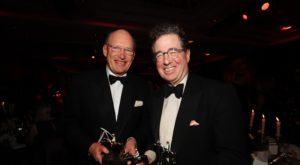 Up Next
Enable stars at ROA Awards