A never say die ride from Hollie Doyle aboard Class Clown at Southwell saw the 23-year-old achieve her 107th win of 2019, the most ever by a female jockey in a calendar year in Britain.

Riding the David Barron-trained favourite in a six-furlong nursery, Doyle looked booked for second before conjuring a late rattle from Class Clown, getting up in the final strides to score by a head.

Only two other women have ridden over 100 winners in a year before, with Hayley Turner achieving the feat first in 2008 before Josephine Gordon partnered 106 winners in 2017.

Doyle, who is the partner of jockey Tom Marquand, has received strong backing from trainer Archie Watson during this campaign. She described herself as “a bit emotional” after her Southwell triumph.

The feature race on Sandown’s card today is the Grade 2 Ballymore Winter Novices’ Hurdle (2m4f) in which seven runners go to post.

A fascinating contender is Overthetop, bought for £150,000 after winning his sole point-to-point outing and the easy winner of both subsequent starts for the Olly Murphy stable. The Flemensfirth gelding produced a sparkling performance on his hurdling debut at Carlisle in October, scoring by 12 lengths under Richard Johnson, who retains the ride.

Kim Bailey relies on Happygolucky, third behind Thyme Hill and Champagne Well in a Grade 2 at Cheltenham last month, while the Paul Webber-trained House Island bids to follow up his Ludlow victory in November but shoulders a 3lb penalty.

Stamina is the order of the day in the Watch On Racing TV Exeter Handicap Chase (3m6½f) at Exeter. Dancing Shadow, trained by Victor Dartnall, has a good record at the track and should improve on his fine second at the venue last month.

Tattersalls’ next auction is the February Sale, which takes place from January 30–31. 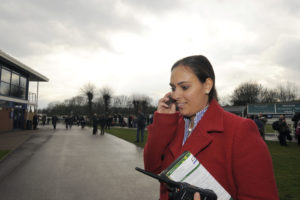