Late Romance, a daughter of Dubawi out of Irish St Leger heroine Voleuse De Coeurs, makes her debut in the Godolphin blue for trainer Charlie Appleby in the mile fillies’ novice stakes at Lingfield (all-weather) today.

Initially trained by Dermot Weld, Voleuse De Coeurs won five races under his care including a six-length success in the 2013 Irish St Leger on what proved to be her final start for the handler.

At Book 1 of the Tattersalls October Yearling Sale in 2018, it was Stroud Coleman Bloodstock who went to 500,000gns to secure Voleuse De Coeurs’ Dubawi daughter.

Her opponents include the James Tate-trained Transcript, a daughter of Night Of Thunder who finished sixth on debut, and Juddmonte homebred Tacitly, who is out of Falmouth Stakes heroine Timepiece.

Kempton’s all-weather meeting features the Listed Wild Flower Stakes (1m4f) where Loxley can build on his second-placed effort over course and distance last time out.

Ludlow’s seven-race jumps card will need to pass a 7am inspection to go ahead today while Haydock stages a six-race National Hunt fixture.

There were fireworks in the Tattersalls ring yesterday evening when Coplow, dam of dual Group 1 winner Billesdon Brook, sold for 2,100,000 million guineas to MV Magnier.

Offered by Stowell Hill Stud on behalf of the Stowell Hill Partners, the ten-year-old daughter of Manduro was sold in foal to Juddmonte’s outstanding sire Kingman.

Jeanette McCreery of Stowell Hill Stud said: “It was a good sale. She has gone to a good home and it means that she’ll go to the best stallions.

“It also means that we can keep the others. One of them had to go and I woke up one morning and thought Coplow, as then we could race the others.”

Earnshaw will become the first son of Medaglia D’Oro to stand in Europe when he takes up stud duties at Haras des Granges in France for the 2020 breeding season. 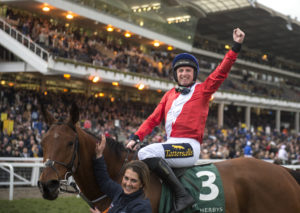 Up Next
Envoi continues rapid rise