Invincible Army continued his upward trajectory with an impressive success in the Group 2 Duke Of York Stakes at York on Wednesday and looks more than capable of hitting the mark in Group 1 events this season.

For Tinnakill House Stud, their decision to purchase Invincible Army’s dam, the Falmouth Stakes heroine Rajeem, for €26,000 at the Goffs November Breeding Stock Sale in 2015 looks to be paying off.

At the time she went through the ring, the daughter of Diktat was the dam of one winner in the shape of five-time scorer Master Rajeem, and she was offered in foal to Slade Power. Invincible Army was only a foal when she was sold and had yet to hit the racetrack for his owner Saeed Manana.

The further family of Rajeem has been active in 2019 thanks to her unraced half-sister Poldhu being the dam of Group 3 Dubai Duty Free Stakes winner and QIPCO 1,000 Guineas runner Dandhu.

With Dandhu set to contest more top-level events this year and Invincible Army seeming to have hit top gear, Tinnakill House Stud could benefit even further if the son of Invincible Spirit goes on and enhances the page by landing a Group 1.

While her pedigree suggested she was a doubtful stayer of the 1m2½f trip of the Group 3 Tattersalls Musidora Stakes, the Roger Varian-trained Nausha defied those doubts when running out a game winner of the contest on Wednesday.

An exciting homebred for Nurlan Bizakov’s Hesmonds Stud, the three-year-old filly is by Banstead Manor Stud’s hot young sire Kingman and out of the unraced Galileo mare Nazym, a three-parts sister to Fillies’ Mile heroine Listen and to Moyglare Stud Stakes scorer Sequoyah, the dam of Henrythenavigator.

Nausha’s victory comes off the back of Kingman supplying a Group 1 winner on Sunday in the shape of French 2,000 Guineas victor Persian King, while two-year-old Full Authority making a scintillating debut at Chester last week for David O’Meara.

Zenda’s influence to live on

On Friday, Khalid Abdullah’s Juddmonte Farms announced the death of Poule d’Essai des Pouliches heroine Zenda, the dam of multiple Group 1 winner and exciting young sire Kingman, following a prolonged bout of laminitis. The announcement came in the week during which her progeny enjoyed success on the track.

Her four-year-old Frankel colt First Eleven captured the 1m4f Jorvik Handicap at York on Wednesday before the Kevin Ryan-trained Repartee, out of Zenda’s unraced Johannesburg daughter Pleasantry, made an impressive debut on the Knavesmire on Thursday.

Zenda’s legacy at Juddmonte will continue for a long time to come. Yesterday the @EquineP team enjoyed filming her granddaughter, this inquisitive filly by Invincible Spirit, whose dam Present Tense (BATED BREATH) is pictured as a foal with Zenda in our previous tweet #FoalFriday pic.twitter.com/CSubq0HgRS

Juddmonte has three daughters of Zenda in their broodmare band to carry on her influence – they are Multilingual, Panzanella and Present Tense.

Simon Mockridge, UK Stud Director for Juddmonte, said on Friday: “She was a very special mare, kind, and a delight to be around – she will be greatly missed by all the team at Juddmonte.”

First stakes winner for Due Diligence

Good Vibes was following up her impressive victory at Salisbury last month when she wore down the already successful Exclusively to land a five-furlong conditions event for fillies.

The win provides @WhitsburyManor Stud sire DUE DILIGENCE with a first stakes winner.

The filly is a graduate of the @GoffsUK Premier Yearling Sale, where she was sold by breeders @WhitsburyManor to @annarossKRB. pic.twitter.com/NSyJ75ICpp

Whitsbury Manor Stud bred Good Vibes out of the winning Satsuma, a daughter of Whitsbury’s late stalwart Compton Place, who stood at the stud for 17 seasons before his death in 2015. Agents Anna and Kevin Ross went to £35,000 for Good Vibes at last year’s Goffs UK Premier Yearling Sale.

Due Diligence, who was runner-up in the 2014 Group 1 Diamond Jubilee Stakes at Royal Ascot, began stud duties at the Hampshire operation in 2016. The debut winner from his first crop emerged last month when his daughter Littledidyouknow claimed a novice contest at Southwell.

A son of Claiborne Stud’s linchpin War Front, Due Diligence stands at a fee of £4,000.

Sir Robert Ogden toasted success on the Knavesmire on Friday when his lightly-raced filly Agincourt progressed from a narrow defeat last time out to regain the winning thread in a seven-furlong handicap.

Trained by David O’Meara, the daughter of Declaration Of War was bred by Ogden out of the Royal Applause mare El Diamante, a half-sister to the stakes winners Desert Blanc and Lumiere Noire. Her further family includes Prix de l’Opera heroine Satwa Queen.

Ogden bought El Diamante for €200,000 from her breeder, Haras du Mezeray, at the 2010 Arqana August Yearling Sale. Agincourt is the first winner produced by El Diamante and at last year’s Goffs November Foal Sale, her colt by No Nay Never was picked up JC Bloodstock for €68,000. 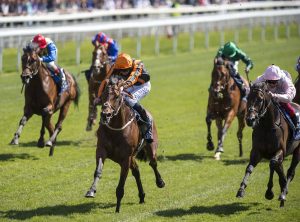 Up Next
Telecaster hits high notes in Dante Stakes