French raider Suesa kicked into top gear at the right moment to produce a change of gear that saw her capture the Group 2 King George Qatar Stakes at Goodwood on Friday.

The three-year-old had disappointed when finishing eighth in last month’s Commonwealth Cup at Royal Ascot but bounced back to form impressively in the 5f sprint that featured Battaash, who had won the last four editions of the race.

She was delivered expertly by jockey William Buick, sporting the colours of owner George Strawbridge, to challenge at the furlong pole as Battaash’s challenge for a fifth win faded dramatically.

There was simply no stopping Suesa as she secured a three length victory over Dragon Symbol in second with a further one and a half lengths back to Glass Slippers in third.

Buick, speaking afterwards, said: “She’s an absolute sweetheart and I rode her in the Commonwealth at Ascot on the Friday and the ground was very bad.

“I probably learned a lot that day, she’s full of speed and came back to five today and travelled through the race so smoothly, she was hard on the bridle the whole way and then she has that kick at the finish.

“Today was better conditions for her and Mr Rohaut was adamant she was in good shape. I spoke to Olivier Peslier and he told me a thing or two about her. It’s great to get the ride and she’s a very good filly.”

James Wigan, Racing Manager for Strawbridge, added: “We thought Suesa was very good before Ascot. Then the rains came and the ground was bottomless and she just could not act on it. William looked after her then.

“What she did in France was very impressive before. We didn’t know what she’d be like against these, but we knew she was pretty good.

Suesa shows that she’s a sprinting force to be reckoned with in The King George Qatar Stakes 💥#QGF pic.twitter.com/apjR8FW2Fj

“There are not really any sprint races in France in the summer, so this was really the only place to come, but I was concerned about this rain!

“As for a run at York [in the G1 Nunthorpe Stakes], it depends what she is like when she gets back. She’ll have had quite a lot of travelling, coming here and then going back, then coming again having already done Ascot. The Abbaye will be the obvious target.

“There is a very good chance she will stay in training next year as the owner is very much a sportsman.”

On Battaash finishing seventh, Shadwell’s Angus Gold said: “I think Battaash has done well to get back to the races. He had an injury last year and it took him a long time to come right. He’s had issues all his life and I think it’s remarkable that he’s back with us at all.

“Jim said that he felt good, the enthusiasm was there. He didn’t like the ground, but he is a seven-year-old who has had a lot of problems. I’ll speak to Sheikha Hissa. He is her horse and the last thing we want to do is abuse him.

“After all the problems he’s had and him being seven, why would we go on now? He had such a brilliant year last year. He won three out of three last year and was at the top of the game.

“I said to Sheikh Hamdan last year, he’s a six-year-old and had a fracture. He had a fantastic year and he said let’s operate on him and see. If he’s in good form, we’ll try again.

“Ascot I thought was a good run given how long he had been back in the yard. Today was not so good.

“I’ve got to speak to Sheikha Hissa and until I speak to her, I don’t know. Obviously, Charlie [Hills, trainer] and the team would like to keep him in the yard, but there comes a time for all of us.”

Baaeed maintained his unbeaten record as he breezed to success in the Group 3 Thoroughbred Stakes for Shadwell Estates, jockey Jim Crowley and trainer William Haggas.

Having dispatched of his rivals in the Listed Sir Henry Cecil Stakes by four lengths earlier this month, Baaeed was cruising as he began to pass the field two furlongs from home.

Once in front, the three-year-old was allowed to extend and came home six and a half lengths in front of El Drama with a further half a length back to Tasman Bay in third.

Now the winner of his last four starts, Haggas was impressed with the manner of the colt’s performance and said: “Baaeed keeps doing it. People keep saying he is running good times. He’s just a good horse.

“He’s sound, healthy and fast. If you look at him, he’s a full brother to Hukum who stays one mile six furlongs and looking at him, he looks like he is faster than his pedigree suggests. We will stay at a mile for now.

“Baaeed is in three races – the Jacques Le Marois, the Celebration Mile back here and the Moulin. I would like to run in two of them. He started life on June 7, and it is now July 31. He has had four races and has been running in decent company against three-year-olds. It is time he took on the better ones in the bigger races.

“Whether we can go to the well again – because however easy they win, they have always had a race. We’ll see how he is. He’s in the races that he should be. 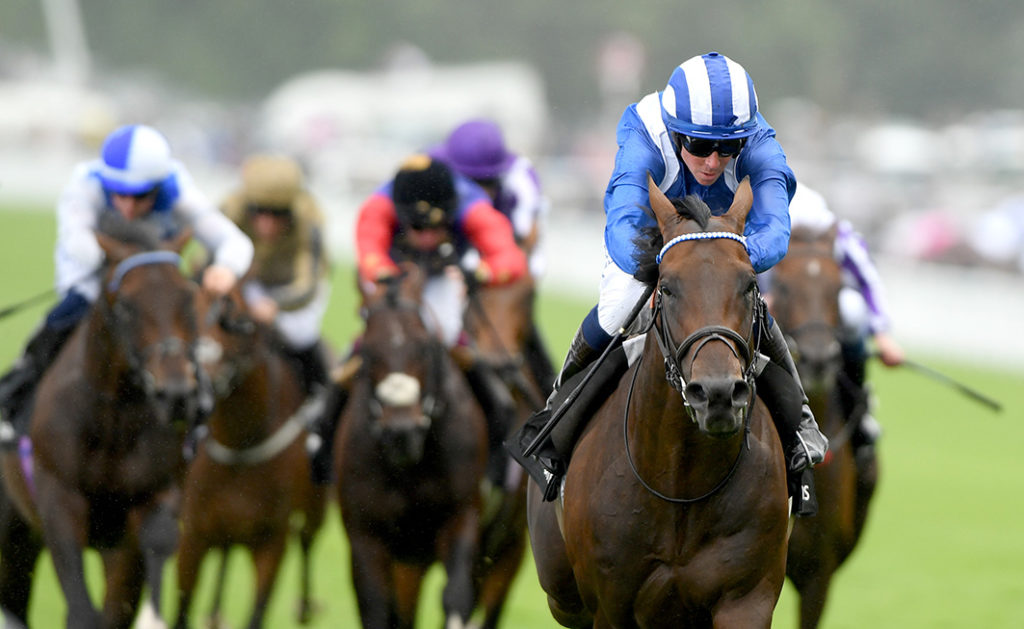 “I learnt today that Baaeed doesn’t need fast ground to be at his best. It confirmed that he is a good horse. I’m not for running them regularly but horses are bred to race.

“When the Sussex Stakes closed, he wasn’t in the race as he hadn’t run. We toyed with the idea of supplementing him. If this race hadn’t been here, we may have. However, when the rain came on Monday, I was glad we didn’t decide to go there as when you ask the owners to cough up £70,000, you can hardly take them out.

“I am very happy to run him in a top-class race next time.”

Shadwell Estates were back in the winner’s enclosure immediately after the race when Maydanny provided trainer Mark Johnston with a sixth winner in the Golden Mile Handicap.

Johnston said: “This was another horse who we had reservations about on the ground, but he did it well.

“Maydanny loves Goodwood and goes well here. He had a few traffic problems but responded well to that and picked up really well. It’s a great result.

“Jim could have come wide but instead went for the gaps on the rail and it worked out well.”

Haggas recorded a double on the day when the Queen’s homebred Wink Of An Eye was victorious in the 1m3f handicap that closed Friday’s card.

Another former jockey to notch their first success at the Qatar Goodwood Festival this week was Richard Hughes, who struck with Calling The Wind in the marathon 2m4f handicap that opened Friday’s card.

Among Hughes’ victories as a jockey were in the Sussex Stakes on Canford Cliffs and Toronado as well as the Nassau Stakes on The Fugue.

Hon his first winner as a trainer, Hughes said: “It was brilliant. I actually watched it on the owner’s phone. We were stood out the front and there was no big screen. I was tempted to run in but I said, ‘what will be will be’. Luckily, he went all the round.

“I was confident after Ascot. I thought if he could reproduce that, in the same conditions over two and a half miles, he’ll take all the beating.” 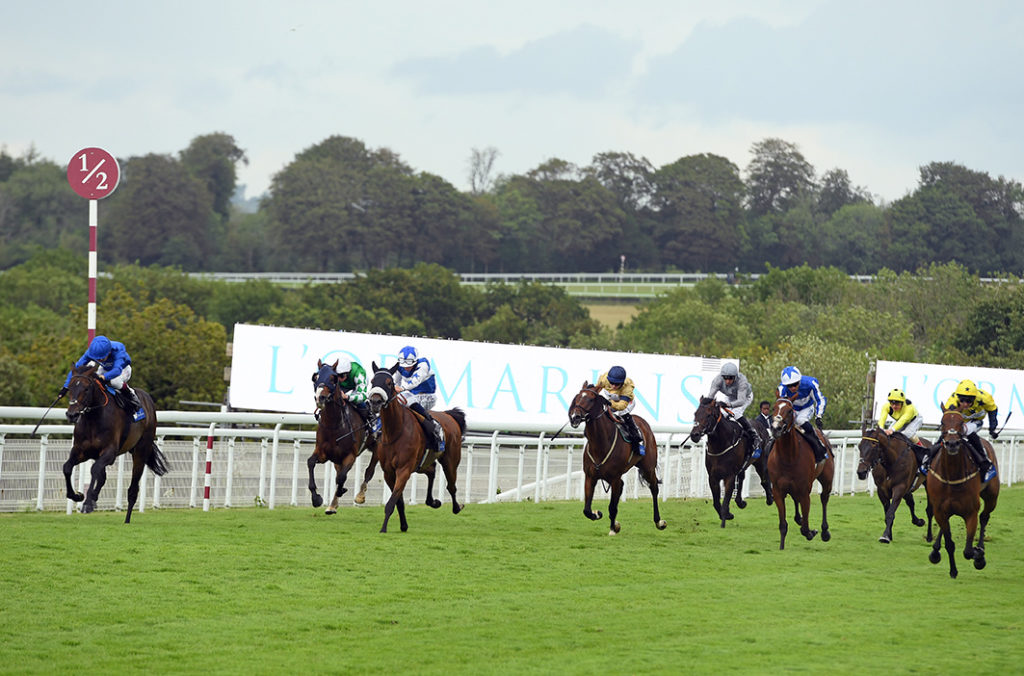 Passion And Glory hung on bravely under the drive of jockey Oisin Murphy to claim the Group 3 Glorious Stakes by a neck from popular eight-year-old Euchen Glen.

Murphy said: “There was no pace on paper and we had very easy sectionals. We didn’t go fast but it’s very blustery out here and it’s hard to make all because of that wind.

“Passion And Glory is definitely a Group horse who is stepping up all the time. He’s an absolute dude, look at his temperament. Saeed [bin Suroor] is huge for me. Year on year he really helps me out so thanks or giving me another Glorious Goodwood winner.”

Trainer Saeed bin Suroor added: “Passion And Glory’s last three runs have shown his improvement and even today I said to Oisin about the ground, but he handled it well and it looks like the best ground for him.

“I always liked him. He had tiny problems that stopped him, but this year he is sound and is doing good from race to race. He is classy and from now on we will look for Group 1 races for him. I am now going to take him to Germany next month for the Group 1 at Baden-Baden.

“He just had small injuries. He would be ready to run but would then have a small injury, but he is sound this year. He wasn’t really ready in Meydan [earlier in the year], but he has improved all the time since he has been back in Newmarket.”

Elsewhere on Goodwood’s card, trainer Tom Dascombe and jockey Danny Tudhope teamed up to great effect with Ever Given to land the 6f nursery handicap. 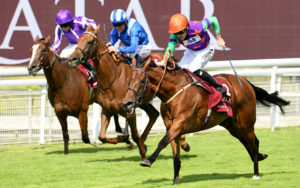 Up Next
Lady Bowthorpe lands first Group 1 in Nassau Stakes