Big future for My Drogo
News

An outstanding winter in Dubai for Lord Glitters continued at Meydan on Saturday as David O’Meara’s popular veteran put in a withering late run to lift the Group 1 Jebel Hatta.

It was the second Group 1 win for Lord Glitters following his success in the 2019 Queen Anne Stakes at Royal Ascot. Although now in the veteran stage of his career as an eight-year-old, he has been in fine form in Dubai this winter having previously taken the Group 2 Singspiel Stakes and run third in the Group 2 Al Rashidiya.

“It wasn’t really until the last furlong that he started to kick into gear,” Tudhope told the Dubai Racing Channel. “They went steady and it wasn’t really run to suit him so I had to make a move sooner than I’d liked. I had William in front of me [on Al Suhail], I kept him in sight and when he came out, that helped me a bit – my horse likes going through horses. It just shows how classy he is.

“He ran some solid races throughout last year and didn’t have a hard campaign so came here quite fresh. It’s amazing for the owners [Sandra Turnbull and her late husband Geoff] to get some more Group 1 wins. A big thank you to them and I’m glad I’ve been able to deliver. The aim now is the Dubai Turf in three weeks times.”

Now the winner of nine of 35 starts, Lord Glitters is one of four Group 1 winners sired by Whipper, who now stands at Haras de Treban in France, and was bred by Sca Elevage De Tourgeville and Mme Hilary Erculiani out of the Listed-placed Lady Glitters, by Homme De Loi.

Salute The Soldier in line for World Cup bid

Salute The Soldier made all land the feature event at Meydan, the Group 1 Al Maktoum Challenge R3, and confirm himself as a live candidate for trainer Fawzi Nass in the Dubai World Cup later this month.

Salute The Soldier was able to settle into good rhythm up front under Adrie de Vies and had enough in reserve to repel Hypothetical by a length-and-three-quarters. Roman Rosso was another three lengths away in third.

The son of Sepoy was formerly trained by Clive Cox, for whom he won four times and hit a rating of 104. He was sold at the end of his four-year-old season at the Tattersalls Autumn Horses in Training Sale for 380,000gns to Oliver St Lawrence, acting on behalf of Nass, and has continued to progress since then, with victories in the Group 3 Burj Nahaar and Group 2 Al Maktoum Challenge R2 last month also to his credit.

“This means a lot,” said de Vries, who was celebrating his first Group 1 win in Dubai. “This horse means a lot to the stable, and now we have hopes for the big day in three weeks time.

“He’s still got his little tricks but now he’s a lot more mature and calm. I was happy to make it myself, I didn’t get too much pressure and he got the trip well today. He only does enough and I think there’s a little more in the tank. Now we’ll just keep him happy for the next three weeks and look forward to the Dubai World Cup.”

Salute The Soldier becomes the second Group 1 winner for former Darley shuttler Sepoy, who now resides permanently in Australia, and was bred by Alan Spence out of Street Fire, an unraced Street Cry relation to American Grade 1 winner Monzante. 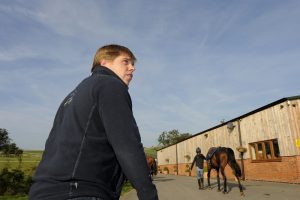 Up Next
Big future for My Drogo