Racecourses set to welcome crowds back next week
News

Quality remained key during a selective day of trading

Quality remained key at the Tattersalls December Foal Sale in Newmarket on Thursday, with a son of Sea The Stars leading the way during a solid but selective day of trading.

The pinhookers were again out in force and indeed, many of the established outfits struck on multiple occasions, among them Tally-Ho Stud, who came away with 305,000gns worth of stock, and Yeomanstown Stud, whose spend amounted to 317,000gns.

However, their interest wasn’t enough to prevent a contraction of the market from the corresponding day in 2019.

An online bid of 170,000gns was enough for Oneliner Stables to see off an array of pinhookers and seal the purchase of the day’s session-topper, a Sea The Stars colt from Newsells Park Stud.

The colt is the second living foal out of the unplaced La Mortola, a regally-bred Dubawi half-sister to the Group 1 winners Jakkalberry, Crackerjack King and Awelmarduk.

“He is a Sea the Stars colt out of a Dubawi mare, he has it on both sides and he comes from an outstanding family – two champion horses in the second dam,” said Oneliner’s Gerard Lowry, who bid online despite being present on the sale grounds.

“He has great movement, he is a lovely individual. He was our pick of the day so we are delighted to get him. All going well and with a bit of luck he will come back to Book 1 next year and he will do us proud.

“We have had luck before with Sea The Stars so it is going back to the well! It is big plus, too, that he has come out of Newsells – the farm is such a noted breeder and consignor. He has come off a great farm, and they have done a fantastic job with him.” 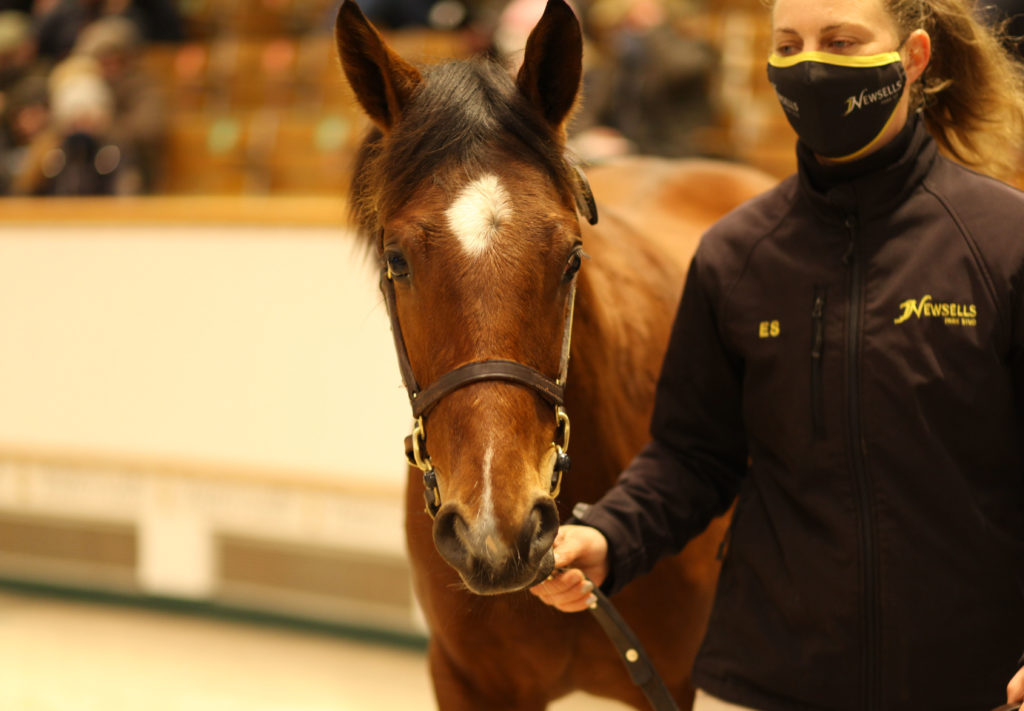 This Sea The Stars colt topped the second day of the Tattersalls December Foal Sale at 170,000gns. Photo – Tattersalls

Oneliner also went to 140,000gns for a Camelot colt from Pat O’Rourke’s Belmont Stud. The colt is the second foal out of Delta Dreamer, an Oasis Dream half-sister to Grade 3 winner Juliet Foxtrot.

A strong vote of confidence came the way of Coolmore’s young Classic winner Saxon Warrior in the sale of his very first representative through the ring, a colt out of Aktoria who made 160,000gns to pinhooker Timmy Hyde of Camas Park Stud.

The headline act of Highclere Stud’s second day draft, the colt was bred by Leonidas and Marina Marinopoulos and partners out of the Listed Prix Six Perfections winner Aktoria. The daughter of Canford Cliffs is a half-sister to the Group 3-placed Galaktea and a direct descendant of the high-class racemare and outstanding producer Stilvi. 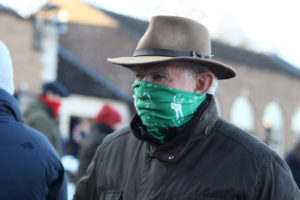 “Saxon Warrior was a hell of a racehorse, he was one of the best racehorse for many, many years,” Hyde remarked of the stallion, a rare European representative of Deep Impact who was trained by Aidan O’Brien to win the 2,000 Guineas and Racing Post Trophy.

“This colt is a lovely individual and will come back for resale next year.”

Lady Carolyn Warren of Highclere Stud, who are selling their first draft of foals at Tattersalls in ten years, was understandably very pleased with the result. She said: “I am absolutely delighted for breeder Leonidas and Marina Marinopoulos with their partners.

“What a wonderful example of how lovely Saxon Warrior’s stock are. He is a real credit to his sire, he is a gorgeous horse with a great temperament, he was very popular in the yard.

“He came to us to prep, we do a lot with the Leonidas and Marina – our mares stay with them when they are over for French stallions and we sell yearlings for them too. They are tremendous breeders, they been in the game for a very long time, they are lovely people.”

Camas Park later returned to the well to purchase another by the stallion, a colt out of Alltherightmoves, for 100,000gns. As a result, Saxon Warrior currently leads the way among the first-crop sires thanks to the sale of six foals for an average of 80,333gns.

Of the other first-crop sires, Whitsbury Manor Stud’s Havana Grey hit a high note with the sale of a half-brother to Cornwallis Stakes winner Good Vibes for 130,000gns to Harry Sweeney of the Japanese-based Paca Paca Farm.

The colt was sold as a homebred from Whitsbury Manor Stud and is out of the winning Satsuma, a daughter of former Whitsbury stalwart Compton Place.

“These Havana Greys have gone so well, it is just fantastic,” said Ed Harper of Whitsbury Manor Stud.

“Good Vibes was great for the mare, and Orange Blossom was also very good as well, although she did not get black-type.

“But people have really appreciated these Havana Greys, everybody has come to look a them, which is a test in itself, everybody has opened the doors to see them. They are going to good homes as well, so I am really really pleased. But I never thought he’d make that. I thought there might be an outside chance of making six figures on a good day, I never thought it would get that.” 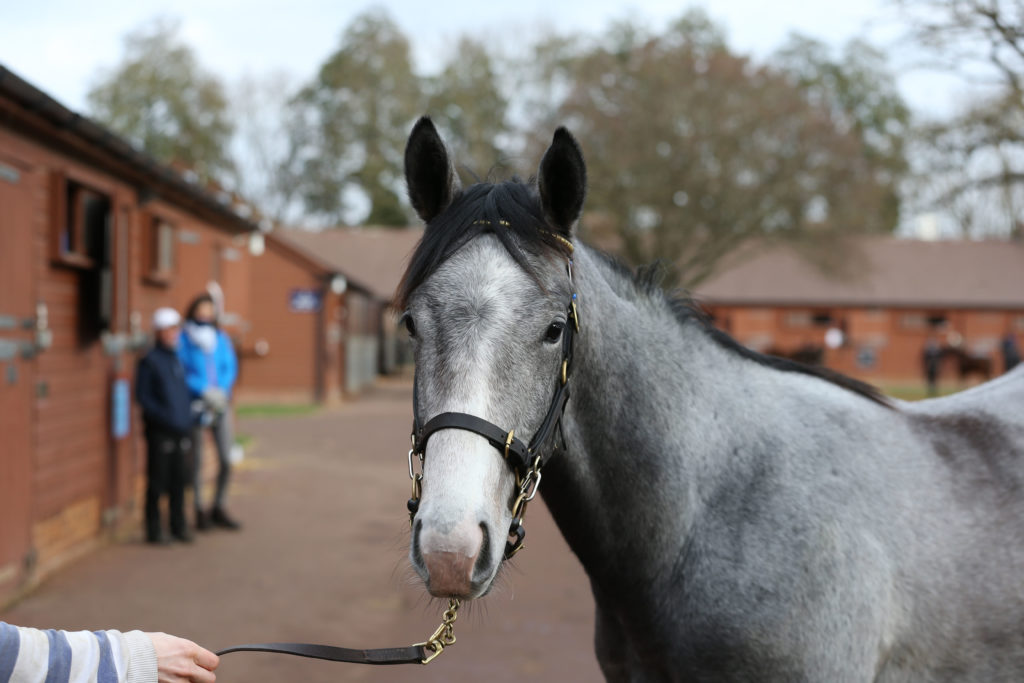 Havana Grey enjoyed a major sale result with the sale of this colt for 130,000gns. Photo – Tattersalls

Progeny of the ever popular Kodiac again drew a number of admirers, notably a half-brother to classy American two-year-old Illegal Smile who sold out of Keith Harte’s draft for 110,000gns to Tally-Ho Stud, Kodiac’s most fervent supporters who stand the stallion at their Mullingar-based stud.

Bred by Max Ervine, the colt is only the third foal out of Fine If, whose second, Illegal Smile, recently captured the Stewart Manor Stakes at Aqueduct for Wesley Ward.

In turn, Fine If is an unraced Iffraaj half-sister to Mill Reef Stakes winner Galeota from the fast and precocious family of sprint stakes winners Burnt Sugar, Brown Sugar and Darkanna.

“Another great foal from Max’s farm in County Down,” said Harte. “He only has five or six mares.

“This is a cracking Kodiac, and he was bought by the right men who support the stallion well. We had a lot of interest in him from all the top buyers.”

He added: ”Max will put the odd foal through – it depends what way the year goes. He had a good yearling sale, but no one knew what way the yearling sales were going to go, so he entered the foal here. He then said, ‘Why don’t we just go and see how we get on?’ It has paid off! This is a very nice foal – we are lucky to have him as a client.”

Few stallions have attracted more chat this week than the Australian shuttler Zoustar, who arrived for his first European season at Tweenhills Farm and Stud in the spring 2019 in possession of a big reputation off the back of a flying start at stud in Australia.

That first European crop of foals are on show this week and already include several major highlights in a pair of relations to the Group/Grade 1 winners Gorella and Hooray who hit six figures apiece.

Bred by the Bewitchment Partnership and appropriately sold by Tweenhills, the colt is a half-brother to minor four-time winner Laith Alareen and out of Bewitchment, a placed Pivotal half-sister to champion two-year-old Hooray. 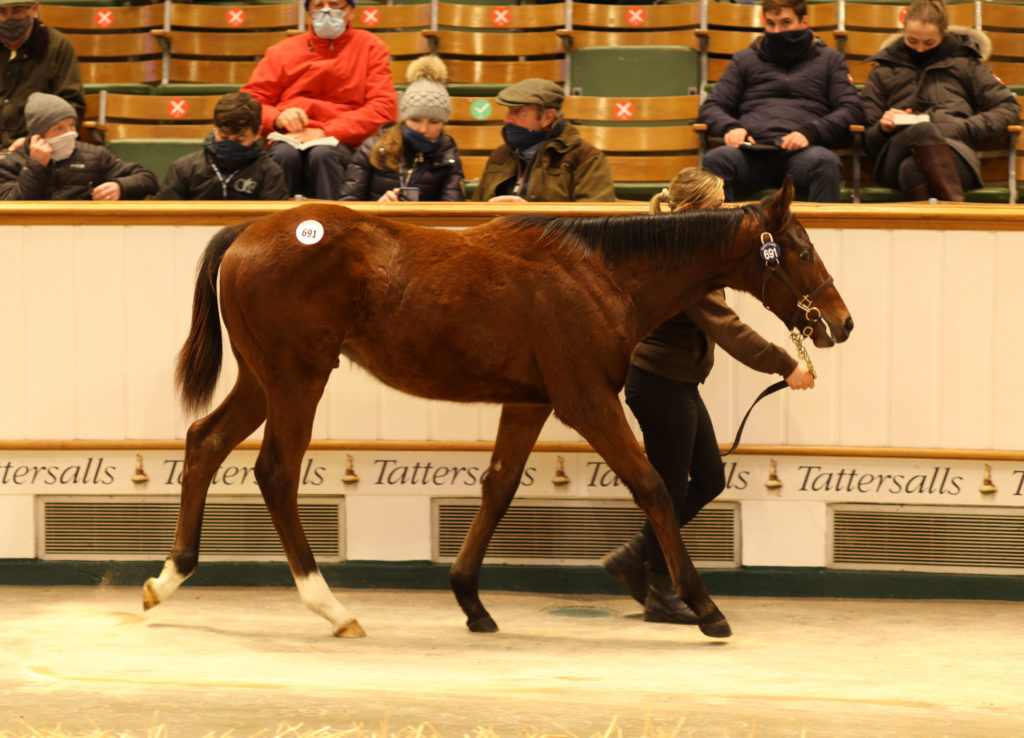 This Zoustar colt was knocked down for 100,000gns. Photo – Tattersalls

Howden also went to 82,000gns for a filly from the only crop of the much-missed Roaring Lion, also from Tweenhills.

“David has seen all the foals at the farm and particularly loved those two,” said David Redvers, the owner and manager of Tweenhills. “They will race in his colours. David is very enthusiastic, and got into racing two years ago. He also bought a number of yearlings in the autumn.” 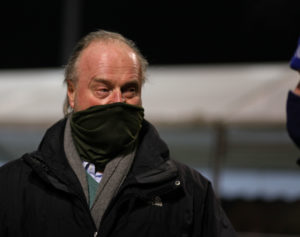 The most expensive filly of Thursday’s session was the day’s sole Frankel catalogued, a relation to Kingman who was purchased by pinhooker Philipp Stauffenberg for 105,000gns.

The filly was sold by Mill House Stud on behalf of Wood Farm Stud, who purchased her dam Panmolle for 200,000gns at Tattersalls last December. The winning Panmolle is a Lawman half-sister to Ricetta, who provided the family with an update when third in this season’s Musidora Stakes, and out of a half-sister to Kingman.

“The last one I bought from the Mill House draft cost me just 10,000gns,” said Stauffenberg.

“She was by Cable Bay, she won in England and has been stakes-placed in Germany. She is called Belle Anglaise and has now joined my broodmare band. I laughed with Mill House that it would be nice to do the same again!”

The partial dispersal of the Gredley family’s Stetchworth and Middle Park Studs, offered through New England Stud, also unsurprisingly proved popular, notably as the source of colts by Sea The Moon and Night Of Thunder who made 100,000gns and 95,000gns respectively. 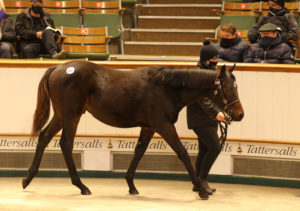 This Sea The Moon colt was the highlight of Thursday’s partial dispersal from Stetchworth & Middle Park Studs. Photo – Tattersalls

“He is a lovely colt,” said Woods. “We saw him three days ago and liked him.

“I have a huge amount of time for the sire. Hopefully, his two-year-old half-brother George Bancroft, who is with Roger Varian and is by Australia, will win next year.

“We did pay a little more than we were planning!”

On what was a good day for Sea The Moon, the Lanwades Stud stallion was also represented by a half-sister to the classy Desert Icon who sold for 115,000gns to Guy O’Callaghan’s Grangemore Stud.

The Tattersalls December Foal Sale continues tomorrow at 10am with the third session, traditionally the strongest of the four-day auction. 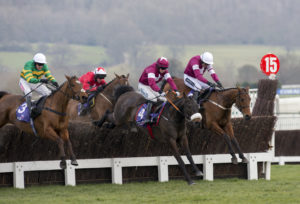 Up Next
Racecourses set to welcome crowds back next week