After the fireworks provided last week by the sale of the first foals by Sea The Stars, all eyes of the bloodstock world will be on the sales ring at Tattersalls on Friday as nine more foals by the champion racehorse are put to the market.

All members of the select bunch are naturally well related and include half-siblings to three Group 1 winners, with the first through the ring being lot 863, a chestnut half-brother to the Park Express Stakes winner Oh Goodness Me out of the Indian Ridge mare Coyote.

Later in the day, the Castlebridge Consignment offers a three-parts sister to the Irish 1,000 Guineas winner Nightime, who is by Sea The Stars’s half-brother and fellow Derby winner Galileo.

A policy shift at Cheveley Park Stud has seen the Newmarket operation sell some beautifully-bred colts this year and that includes lot 955, a son of Sea The Stars out of Virtuosity, a full-sister to the stud’s young stallion Virtual and three-parts sister to Iceman. 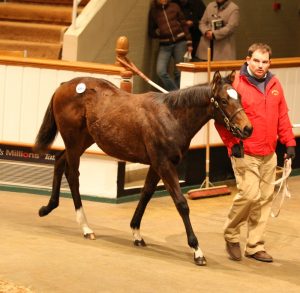 The top lot (484) on the first day of the foal sale, a colt by Kyllachy © Tattersalls

Another colt who is certain to be popular is the March-foaled son of Sadima, who has been a real blue hen for Frank Dunne, producing Group 1 winners Creachadoir and Youmzain plus Group 3 winner Shreyas.

Last week, five foals by the former Horse of the Year offered during the final day of Goffs’ Foal Sale sold the staggering average of €572,000.

During the first of four sessions of the December Foal Sale, the offspring of sprinting sires held sway with two Kyllachy colts topping the list at 55,000gns and 50,000gns respectively.

Whitsbury Manor Stud’s Compton Place was also a popular sire pick with three colts in the top ten, while his stable-mate Sakhee’s Secret, whose first yearlings were on sale earlier this season, was responsible for two of the top ten lots of the day.

Up Next
Boost to prize-money tariffs