Wondermare Enable has been retired from racing after a stellar career that yielded a number of big-race wins, including back-to-back editions of the Prix de l’Arc de Triomphe in 2017 and 2018.

The news was confirmed on Monday morning after Khalid Abdullah’s Juddmonte operation decided against running the six-year-old at QIPCO British Champions Day at Ascot on Saturday.

John Gosden has masterfully handled Enable’s career since the daughter of Nathaniel entered his care in 2016. It was in the November of that year that she made a winning debut as a two-year-old over a mile at Newcastle.

As a four-year-old, a disrupted campaign saw Enable only return to the racetrack in September, when she took the Group 3 September Stakes at Kempton, before defending her Arc crown a month later when she held off Sea Of Class by a short-neck in a dramatic finish.

In 2019, Enable landed the Coral-Eclipse, King George VI and Queen Elizabeth Stakes and the Yorkshire Oaks before being denied by Waldgeist in her bid for an unprecedented third Arc success.

Kept in training as a six-year-old, Enable recorded a third successive win in the King George VI and Queen Elizabeth Stakes, another win in the September Stakes before finishing sixth in this year’s Arc, unsuited by the heavy ground.

Douglas Erskine Crum, Chief Executive of Juddmonte, said: “After consulting her trainer John Gosden and his Racing Manager Teddy Grimthorpe, Prince Khalid has decided that Enable will be retired from racing and will now join the Juddmonte broodmare to be covered by Kingman in 2021.”

Lord Grimthorpe said: “She has brought so much joy to everyone who has been involved with her. Her elegance and forceful personality have been nurtured by John and his team at Clarehaven, especially by Imran who has looked after her with such calm and devotion.

“In her, Frankie found a willing partner to execute her ability on the racecourse. Her CV withstands the closest of inspections; very few can match and what she has given to racing.” 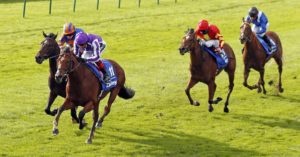