The ‘Sprint King’ Dandy Nicholls has announced his retirement from the training ranks stating financial reasons.

Coming into effect immediately, Nicholls saddled his final runner in Doha at the end of last month.

It turned out to be a winning exit as his eight-year-old gelding Sovereign Debt – a Group 3 winner and runner up to Farhh in the Lockinge Stakes – ran out a half-a-length winner of the £92,000 Marketing Cup.

Nicholls sent a tweet out confirming the decision: “Sovereign Debt was our last runner from Tall Trees, as due to financial problems we have had to cease training. It was nice to go out on a high during what has been a difficult time and I’d like to thank all our owners that have supported us.”

The 60-year-old first began his venture in racing as a jockey, riding over 400 winners. He then turned his attention to training in 1992 starting out with only five horses.

Supported by his wife Alex Greaves, an accomplished lady rider in her own right, Nicholls went on to capture most of the big Group 1 sprints in Britain and Europe.

Continent gave him his first Group 1 when storming through to collar his stablemate Bahamian Pirate in the 2002 renewal of the Darley July Cup.

Those two sprinters added another Group 1 each to Nicholls’ resume, with the former taking the Prix de l’Abbaye and Bahamian Pirate the Nunthorpe Stakes at York.

His son, Adrian, was to partner his last and penultimate Group 1 winner Regal Parade, whose love for dig underfoot saw him claim the Haydock Sprint Cup and the Prix Maurice de Gheest in France.

Adrian Nicholls said: It’s sad it has to end like this and if it wasn’t for him my career would have been very different. We used to turn up in Ireland with the likes of Tax Free and Inxile and win Listed and Group races for fun, it was like shelling peas.

“Dad didn’t go looking for sprinters, but after he’d had success with them a lot of people started sending them to us, a bit like Robert Cowell now, but we also had success with two-year-olds like Strike Up The Band and Mister Manannan.”

It was nice to go out on a high

Since the yard’s best season in 2011, which saw them produce 93 winners, the numbers have dwindled somewhat.

Nevertheless, last season he still had big handicap wins with the likes of Scottish Stewards’ Cup winner Orion’s Bow who completed a five-timer.

Nicholls faces two charges of sexual assault which will go to trial in the summer. 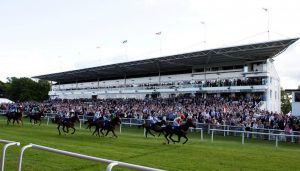 Up Next
£2 million boost for Hamilton