Ahead of QIPCO British Champions Day next month, a star-studded line-up of sports stars took on the world’s highest-rated thoroughbred sprinter, Battaash, over a ten-metre sprint at Exchange Square, Broadgate in London on Thursday.

Running alongside an interactive wall that showed Battaash’s time of 1.71 seconds in lights, it was British Champions Day ambassador Gemili who came out on top with a time of 1.47s.

Gemili said: “I really enjoy going to the races and doing the ten metre sprint today gave me a real sense of just how quick and powerful racehorses are.

“I’m delighted to beat Battaash’s time but I’m not carrying a jockey or breaking out of the stalls in a race. For a half-ton horse like Battaash to be able to cover ten metres from a standing start in 1.71 seconds is pretty incredible and I’ve even more respect for the jockeys for staying on board during that acceleration.”

Harlequins’ Care took the bronze position with a time of 1.88s, Pendleton came home in fourth posting an effort of 1.93s while Qatar Racing’s retained jockey Murphy, more accustomed to riding a horse, stopped the clock at 2.03s.

Naomi Lawson, Head of PR for British Champions Series, said: “It’s been really exciting for us to put on a challenge like this ahead of QIPCO British Champions Day and it’s been fantastic to have so many incredible British athletes, as well as members of the public get involved.

“We know that over the course of a race it would be impossible for a human to beat a horse but we thought over ten metres some might have a chance.

“It’s been a really fun way of showcasing just how incredibly powerful and athletic the racehorses heading to this year’s QIPCO British Champions day are. We can’t wait to see them all racing on the day for the record-breaking £4.25 million in prize-money on offer.”

Those will wishing to test themselves against Battaash can do so at British Champions Day, when the Race A Champion Challenge will be available on course. 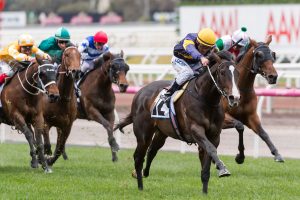