ROA member Rae Borras’s dream of seeing his ‘girls’ in the parade ring at Royal Ascot next year is well and truly alive thanks to the exploits of his unbeaten colt Kenzai Warrior, owned with wife Carol.

Trained by Roger Teal, two-year-old Kenzai Warrior made a successful debut at Salisbury in September before stepping up in class to contest the rescheduled Horris Hill Stakes at Newmarket on November 2, overcoming trouble in running to take the Group 3 prize and enhance his burgeoning reputation.

The son of first-season sire Karakontie is on course for next year’s QIPCO 2,000 Guineas and a potential showdown with Godolphin’s exciting Pinatubo – yet it is the Royal Meeting that is top of the agenda for the colt’s owners.

“Roger has had to ask me, ‘Is he honestly not for sale?’ The answer is no, he’s not. We don’t want to listen to any offers as we don’t want our racing to be about how much [money we can make].”

It is a remarkable feat for the husband and wife team to have landed a Pattern race just two years after they first became involved in the sport as owners, following Rae’s suggestion to Carol, who is a warden at St Albans Cathedral, that they should buy a racehorse for Christmas 2017.

“They were telling us how much they enjoyed their racing”

With no background in racing, the idea was conceived after bumping into old friends Keith and Hazel Jinks, who themselves had been involved in racehorse ownership for 20 years.

Borras, who set up the successful building company Borras Construction in 1981, explained: “They were telling us how much they enjoyed their racing and how much fun it was. It just triggered a thought in my mind, as Carol had always enjoyed going racing – for many years we went to Royal Ascot on Ladies Day.

“Carol, more than me, had always shown a great deal of interest and enjoyment in racing so I said to her, ‘How about we buy a racehorse for Christmas?’ We’d just got to the time in our lives where our financial situation was assured.

“We both agreed it would be great fun and I asked Keith who he would suggest as a trainer. There was only one person that he said that he would recommend – Roger Teal.”

A trip to see Roger and Sue Teal at their Great Shefford base in Hungerford, Berkshire was duly arranged where according to Borras, the quartet clicked instantly. The Teals advised Rae and Carol that they would be better off owning a racehorse outright, as they could go and select the horse at the sales as well as deciding the colours to race in. 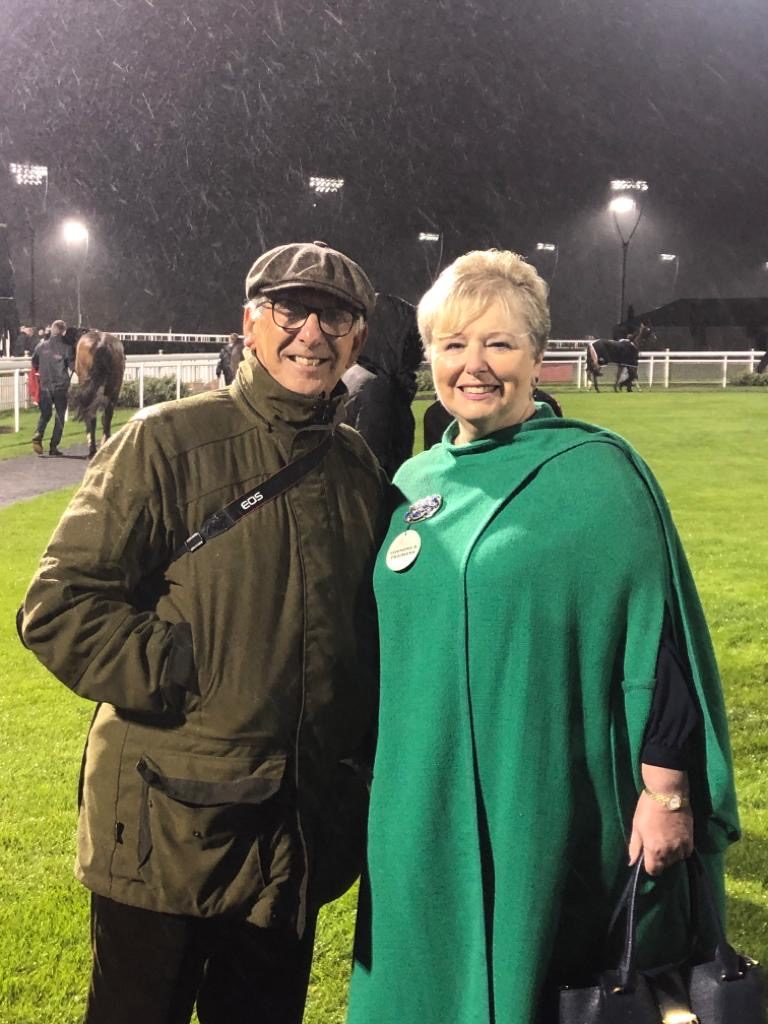 That led to a foray to the Tattersalls Ascot Breeze-Up Sale in April 2018, where for £25,000 a Coach House colt was secured as the pair’s very first racehorse, later named Spirit Of May.

Borras explained: “The reason he’s called Spirit Of May is because our eldest daughter’s mother-in-law, a lovely Italian lady called Mrs May Lombardi, had a stroke a few weeks previously and unfortunately passed away on the day we bought the horse.

“As a matter of respect for the Lombardi family, we decided to call the horse Spirit Of May in her memory. What has turned out to be so positive is that every time Spirit Of May runs, she is remembered.”

Spirit Of May ran six times in 2018, finishing placed on three occasions, which helped the Borrases take pleasure from their first season as racehorse owners.

“We enjoyed it so much,” he said. “The one thing that we didn’t reckon on was how it bought our children – one boy and five girls – and the whole family together.”

So how did Rae and Carol end up adding Kenzai Warrior to their string? Rae takes up the story: “It must have been in March this year that Roger rang me.

“Up to that point, my wife, the [official] racehorse owner [of Spirit Of May], would be welcomed at the gate but I’d wait three paces behind her because I was only her guest! My missus and Sue Teal milked that and always reminded me that he was not my horse.

“I think Roger felt sorry for me and suggested I might like another horse. We made a bid for one though we were unsuccessful and that was that. But I was on the hook then, wasn’t I?”

On the day that Spirit Of May made his seasonal reappearance at Chelmsford in April, Borras took a call from Teal asking if he would back the trainer at the Goffs UK Breeze-Up Sale in Doncaster.

Teal had received a tip about a couple of horses at the auction, suggesting to Borras they could pick up a good one for around £40,000.

Borras said: “I looked at the breeze-ups with Roger and we decided on the horse that eventually turned out to be Kenzai Warrior. [Bloodstock agent] Geoffrey Howson was at the sale while I was on my car phone travelling to Chelmsford as he was bidding.

“The horse was eventually knocked down at £45,000 – that’s not a secret – and that was in fact my upper limit. I still don’t know to this day how Roger talked me into it because I realised I’d just spent, with agent fees etc, £50,000 over the telephone on a horse who I’d looked at for 30 seconds and quite liked the look of!

“That very same day, Spirit Of May won his very first race for us at Chelmsford.”

Kenzai Warrior, a son of Japanese-bred three-time Group 1 winner Karakontie, soon arrived at his new base in Great Shefford, though he was set to carry a different name to the one he now has. Borras, who is an international fisher, wanted to call the colt Sunray Shadow after a famous salmon fly.

Weatherbys’ research revealed there had already been a horse with that name, albeit spelt differently, in the last ten years, so it was back to the drawing board for the husband and wife team.

“Roger and Carol were very keen on calling him ‘Warrior’ because he was a strong horse,” said Borras. “I fish with a Japanese pal of mine and knowing that the horse had a Japanese connection, I asked my friend, ‘If I was fit, bold and strong what would that be in Japanese?’

“He said ‘Kenzai’. So that’s where we got the name Kenzai Warrior and as time has gone on, I think it’s a really nice name.”

Kenzai Warrior was being put through his paces on a regular basis at Teal’s yard and it was after the colt had been out exercising one morning that Borras and his wife believed they “may have uncovered a little diamond”.

The two-year-old made his debut over a mile at Salisbury at the beginning of September, where he produced a battling performance to win a novice contest by a neck. In the process, he became the first British winner for his sire Karakontie, who stands at Gainesway Stud in Kentucky.

Nearly two months after making his debut, Kenzai Warrior was handed a tough assignment when he was declared for the Group 3 Horris Hill Stakes, which had been lost from Newbury’s card a week beforehand due to a waterlogged track and was instead run at Newmarket.

He faced ten rivals in the seven-furlong contest that was run on heavy ground. Showing a tenacious attitude, Kenzai Warrior ran on strongly under pressure to outpoint Ropey Guest and prevail by half a length under Jack Mitchell.

Borras said: “When we first got Kenzai, Roger said to me that’s he’s got it all – but we have to find out if he’s a peacock. He’s like Ronaldo; he’s good and he bloody knows it!

“Kenzai lost his momentum when Impressor impeded him [in the Horris Hill], just when the jockey wanted to push the button. Ropey Guest looked like winning the race and we thought Kenzai was beaten.

“The way he came through in that last furlong just proved to us that he was a little winner and wasn’t a peacock at all.”

The significance of Kenzai Warrior’s Group 3 success did not dawn on the Borrases until the week after Newmarket. Their unbeaten colt has Group 1 ambitions in 2020.

“Roger has a bit of history [in the 2,000 Guineas] with a brilliant performance by Tip Two Win [runner-up to Saxon Warrior in 2018] and we would love to give him the opportunity to go one better,” said Borras.

“I have huge respect for Pinatubo, he’s an exceptional horse, but he hasn’t really been tested yet and our boy hasn’t had a go at him.”

Rae and Carol are now looking forward to next season with Kenzai Warrior and Spirit Of May and don’t have plans – for the time being at least – to buy any more horses.

He said: “We’re both very busy people and sometimes less is more. The beauty of that is we have two horses and their aspirations are totally different.

“We can afford to be very patient with Kenzai, who we feel has the potential to go to the top. Obviously, he can’t be raced too often, whereas Spirit Of May is the most tenacious and honest horse you could wish for.

“If Spirit Of May hadn’t been such an honest racehorse, along with the support of the Teals, we wouldn’t have taken to racing in the way that we have.” 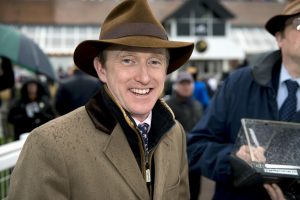