Thirteen runners will tackle the iconic 26.2-mile route for Racing Welfare on Sunday

The iconic London Marathon takes place on Sunday and Racing Welfare will field a 13-strong team of runners, including five competitors from major breeding and racing operation Godolphin, who will pound the iconic 26.2-mile route for the charity.

Anderson said: “Our aim is to raise as much money as we can for a charity that is close to Godolphin’s heart and one that is absolutely crucial to the racing industry.”

Having received support from Racing Welfare to overcome his battle with alcoholism, Darren Moore is taking on the London Marathon having completed the Three Peaks Challenge in September 2018 in aid of the organisation.

Moore explained: “I have a lot back in my life that I had lost and that is thanks to the fantastic work that Racing Welfare do. I wouldn’t be living the life I am today if I didn’t have their backing and support when I needed it.

“I’m also trying to raise awareness and show that there is a way out of addiction. Anyone in the racing industry can go to Racing Welfare for help if they are struggling.”

Sophie Hellyer of the Racegoers Club jumped at the chance to push herself, having only tried 5km as her furthest distance before undertaking her London Marathon training.

“I’m really looking forward to running the marathon,” said Hellyer. “Not only as a personal achievement but also as a way of giving something back and supporting those who work in the racing industry.”

Perth racecourse’s Racing Manager Matthew Taylor is connected to Racing Welfare through the Racegoers Club and has been inspired by his father’s running accomplishments.

He said: “My father completed both the Vitality Big Half and London Marathon and he has inspired me to do the same.”

The London Marathon is an event that has always been on the bucket list for Nigel Kitching, who works for Mark Dwyer and is a keen runner, having completed both ultra-marathons and marathons previously.

Completing Racing Welfare’s team for 2019 is James White, who has been spurred on to run by his wife Emma, who is General Manager of Sedgefield racecourse.

White took up his place following an injury to another participant and added: “When a team member was injured, I offered to step in to run for this worthy cause.”

Racing Welfare’s team had a fundraising target of £30,500, a figure that has already been surpassed with the current total at £33,300 – with more donations expected upon completion.

Speaking about the contribution of the runners, Mark Loades, Racing Welfare’s Head of Fundraising, said: “A huge thank you to all 13 runners for dedicating their time and effort to raising money for Racing Welfare.

“The London Marathon is a highlight in our calendar of fundraising challenges each year and we wish every single one of our team the very best of luck for what we hope will be a fantastic day.”

Follow the runners’ progress on social media in the build-up to Sunday, and throughout the day, by searching for #TeamRacingWelfare. Details of the fundraising pages can be found at www.racingwelfare.co.uk 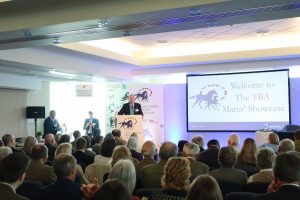 Up Next
Mares celebrated at TBA Showcase