Postponed retired due to stress fracture

Four-time Group 1-winner Postponed has been retired by his connections after suffering a stress fracture.

A son of Dubawi, he has been Roger Varian’s stable star for the past 18 months and enjoyed a stellar 2016, notching three of his four successes at the highest level.

Varian said: “Postponed has been a magnificent racehorse to have in the yard and it has been both a pleasure and privilege to oversee the second phase of his career.

“I am very grateful to Sheikh Mohammed Obaid for allowing me that opportunity and to Postponed himself for proving such a willing and talented ally.”

Postponed shot to prominence in the summer of 2015, while still in the hands of Luca Cumani.

After showing progression throughout the spring he put up a personal best in fending off Eagle Top in the King George VI and Queen Elizabeth Stakes at Ascot.

At the end of the year, following owner Sheikh Mohammed Obaid Al Makhtoum’s removal of his horses from Cumani’s yard, he found himself at Carlburg Stables.

His improvement continued the next year as a five-year-old. A comprehensive win in the Dubai Sheema Classic was followed by a rout in the Coronation Cup at Epsom. Come August, he put in a gutsy display to beat Ballydoyle’s Highland Reel in the Juddmonte International at York.

Although his next run in the Arc was disappointing, his two runs in Meydan this term were highly creditable. The colt’s final race turned out to be a four-length defeat to Jack Hobbs in the race he took last year, the Sheema Classic.

Postponed had all the attributes of the complete champion racehorse

“It’s a shame for everyone that we won’t see him on a racecourse again, and it’s especially sad for Sheikh Mohammed Obaid, who showed such sportsmanship in keeping him in training,” added Varian.

“Postponed had all the attributes of the complete champion racehorse – the speed, the stamina, and a telling kick. He travelled like a machine.

“A stress fracture like this wouldn’t usually be a career-ending injury – except that it’s May and he’s six, and we don’t want to take unnecessary risks with him. He’s done us all proud, and we owe him a great debt of gratitude.”

Plans regarding Postponed’s future career as a stallion will be taken at a later date. 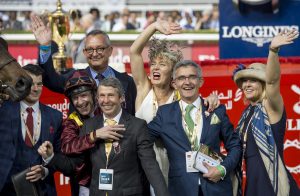 Up Next
Al Quoz Sprint hero bound for Ascot