Poet in motion heads to Leopardstown

After three record-breaking handicap wins at Galway, One Cool Poet heads to the Irish Champions Weekend for more glory

The Galway Festival was lit up by record-setting handicapper One Cool Poet, and now the seven-year-old will contest Irish Champions Weekend.

Trained by Matthew Smith, One Cool Poet won three Flat handicaps in five days at Galway, from a mile to a mile and a half, matching the record set by Busted Tycoon in 2013.

That daughter of Marju won two Flat handicaps and a handicap hurdle in six days, becoming the first horse to win three races at the meeting since it became a seven-day festival in 1999.

“If there was ever a horse able to do it, it’s him,” said Smith. “It doesn’t take a thing out of him. He gets better with racing. You wouldn’t want to leave him too long without racing, in fact. He thrives on it and puts on condition very quickly in between.

“My son James has only just turned 13 and he’s been riding him out for two years now – that will tell you what a nice horse he is.”

He added: “I didn’t know he would win twice, but knowing the horse, we said going in that we’d love to run him twice. The way it worked out, he ran on Tuesday and won, but didn’t look like getting into the race on Saturday, that’s why we ran on Thursday, and when he came out of that so well, we had to go again.

“I knew Saturday morning that he was better than any other day. He was bright and alert and mad for his breakfast!”

Smith cannot fully explain why One Cool Poet came to life at Galway, but feels that it was the confidence he gained by getting his head in front on the first day that snowballed into Saturday. He was kicking himself he had not been entered in a hurdle race on Sunday.

He did, however, know that his charge was coming in to Ballybrit in top form, saying: “We have only about 20 horses, so you get to know them very, very well, and when you know them like that, you just know how they are.”

It’s not the first headliner Smith has produced, either, springing to fame at the very start of his training career with Rawnaq.

He too racked up a memorable treble, winning two handicap hurdles and a Flat race in the summer of 2013. He never did crack Galway – finishing down the field in three Galway Hurdles and a neck second in a 2m handicap – but did take Smith to the Cheltenham Festival, finishing third in the 2015 Coral Cup. Six months later, Rawnaq relocated to America and went on to win two Grade 1 hurdles.

Busted Tycoon, also trained in Meath (by Tony Martin), had won three on the bounce before her Ballybrit treble, and ran only once more in her career. One Cool Poet had won only once in 29 outings and had slipped to a rating of just 66.

In his post-Galway world, the DRFG Partnership-owned star boasts a lofty new rating of 91, which elevates him into premier handicap company.

“There are nice handicaps on both days of Irish Champions Weekend,” said Smith. “One over a mile and a half and another over a mile and two furlongs. We’ll probably aim him at that.”

“He’s had a couple of runs at Leopardstown and run a cracker both times,” said Smith. “He’s up to a nice rating where he will get into that race and the track will suit.”

“We did have Warnaq run last year at Leopardstown,” he said. “But she got upset in the stalls and didn’t break, so it was a bit of a non-starter.”

One Cool Poet’s has also been declared for the Northfields Handicap at the Curragh on Sunday. 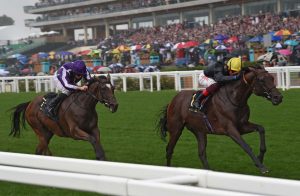