Son of Danehill Dancer is relocating from France

By The Owner Breeder staff 01 September 2020

Group 1 winner Planteur has joined Chapel Stud in Worcestershire from France and will stand as a National Hunt sire for the operation from 2021.

The son of Danehill Dancer, who captured the Prix Ganay when trained by Elie Lellouche, has been responsible for the stakes performers Trueshan, Domagnano, Plegastell, Manguzi, Over Reacted, Agnes, Golconda, Marinka and Fly D’Aspe since retiring to stud.

He is beginning to have success with National Hunt progeny as earlier this year Henry Brulard landed the Listed Prix Wild Risk and Nebuchadnezzar took the valuable Silver Cup Hurdle at Fakenham.

Having stood his first five seasons on the Al Shaqab roster at Haras de Bouquetout, Planteur switched to Haras du Grand Courgeon in 2018 and will now stand at Chapel Stud on behalf of owner-breeder Simon Davies after the deal was brokered by bloodstock agent Richard Venn.

Davies said: “I have been looking for a while to find the right National Hunt stallion to stand in Britain to support British breeding and give owners of broodmares the chance of not only benefitting from the enhanced Great British Bonus scheme but also with a real prospect of achieving success from their progeny.

“It was clear early on that Planteur was going to be suited to being a National Hunt sire and we are really excited about standing a quality National Hunt stallion with Roisin at Chapel Stud who has a first rate facility and the passion to make this a huge coup for British breeding.”

Chapel Stud’s Director Roisin Close added: “Planteur is an exciting new opportunity for National Hunt breeders with an exceptional race record and pedigree to match neatly packaged in an attractive, correct and athletic horse with a fantastic temperament.

“By Danehill Dancer, Planteur will hopefully emulate his paternal brother Jeremy who was an emerging force in the National Hunt scene before his untimely death. We look forward to him joining our other stallions at Chapel Stud.” 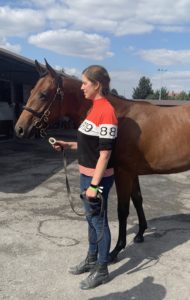 Up Next
Fitzgerald strikes gold again