Popular two-mile chaser, Well Chief, has died at the age of 18 after suffering a bout of colic.

Carrying the familiar silks of the late David Johnson, Well Chief may best be remembered for staring in one of the most thrilling Tingle Creek Chase’s of the modern era.

That day back in December 2004, he did battle with Moscow Flyer and Azertyuiop going down by little more than a length. All three played their part in making it a golden era for two-mile chasers.

A fragile individual, on just his second start over fences as a five-year-old he won the Arkle Challenge Trophy at the Cheltenham Festival beating subsequent Gold Cup hero Kicking King.

A statement posted on www.davidpipe.com, said: “It was with great sadness yesterday that we learnt of the passing of one of our former greats, Well Chief at the age of 18.

“He had been enjoying retirement with Timmy Murphy and another old Pond House favourite Vodka Bleu since he left the yard but unfortunately suffered a from a bout of colic from which he could not be saved.

“The ever popular chestnut was one of the best, if not the best horse we have ever had at Pond House.

“All of his achievements were despite his well-documented injury problems in which is legs have been described as ‘like glass’.”

The ever popular chestnut was one of the best

Aside from his hugely commendable placing in that epic Tingle Creek, he finished runner-up in two Queen Mother Champion Chase’s behind Moscow Flyer and Master Minded respectively.

A son of Night Chief, he was purchased by Johnson after winning two races on the Flat in Germany.

From 29 racecourse appearances, Well Chief won 11 races and accrued over £630,000 in win and place prize-money for his connections. 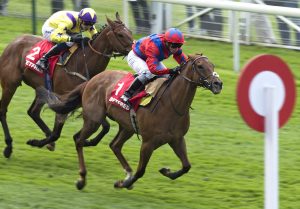 Up Next
Duke bidding to regain Dash crown